Skip to content
28Mar 2018 by Dave Macleod No Comments

This bucket list item was completed on 24th February 2010 in Montreal, Quebec, Canada.

One of my closest friends throughout high school was Michele. Michele is a year younger than me and we were introduced to each other through mutual friends. The more we socialised, the more we began to build a strong friendship. No one can escape the trials and tribulations of high school but luckily Michele and I had each other to talk to about things. We helped each other through the rough times and shared things that we didn’t share with anyone else.

In 2008, I threw my mortarboard in the air and graduated high school. I moved on to university in autumn and while I was completing my first year, Michele was finishing her last year of high school. After Michele graduated, she moved to Montreal to study at Concordia University. I was sad to see Michele go because I was losing a good friend but if she had to go anywhere, Montreal was a good choice. Montreal is my favourite city in Canada. I love flying a couple hours from Halifax to Montreal and listening as the language transitions from east coast English to Quebecois French. Montreal is filled with history, has great shopping, a fantastic night life and a vibrant music and arts culture. There is a bit of something for everyone in Montreal.

When Michele told me she was moving to Montreal, I told her I would do my best to come visit her at least once a year. She began her studies in autumn of 2009 and I decided to plan a trip to see her during my study break in February 2010. In order to save money I purchased my flights on frequent flyer points that I had accumulated from my credit card. After I booked my flights I noticed an advertisement on the website for activities in Montreal that could be paid for using frequent flyer points. I began to scroll through the list and noticed there was a wind tunnel in Montreal called Sky Venture.

I was only two months into my bucket list adventures and was already coming across unplanned opportunities. I decided this would be a good time to cross this one off the list and I just barely had enough points to buy a voucher to the wind tunnel. This saved me $175, which is a lot to a starving university student.

Since I turned 19 I have always collected frequent flyer points through my credit card. They always help me fly or do other activities for free. Check back for my future blog posts where I will be doing a series on how to use credit cards to maximise your travel benefits.

It had been a few years since I was in Montreal and last time I was there, I was not legal drinking age. This time, Michele and I were both legal drinking age and she had already figure out the good spots to check out. Michele was living not far from the city centre, which made it easy for us to take the metro in and make a night of it. We spent our days shopping and sampling the delicious French food and then spent our nights dancing and sampling the delicious domestic beer. Michele was my shopping expert and I was running out of shirts, so the trip was well timed. It made for a few great days and we were both glad to be hanging out again, just like old times. 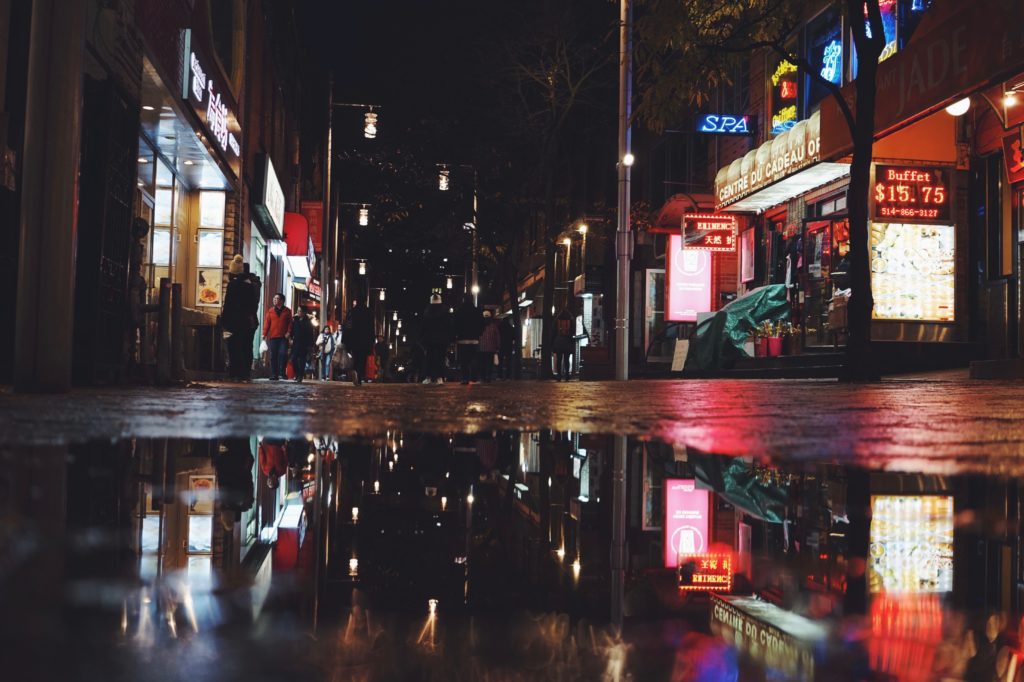 My wind tunnel session was booked in for 24th February around mid-day. That morning Michele introduced me to a breakfast shop called Eggspectation. As you can guess, the theme was based around eggs. In my opinion, it is the best breakfast you can get in Montreal. My two personal favourites are the Eggsilaration and the Eggsuberent. Look them up next time you are in Montreal. We hopped on a bus following breakfast and made our way out to Sky Venture.

I had seen many videos online and on TV of people flying in wind tunnels and it looked amazing. It looked so relaxing and easy to float in a column of rushing air. I was excited to finally experience it and had a few things in mind that I wanted to try. I wanted to do a back flip and fly around like the people in the videos. After all, it looked easy.

When we arrived, I signed the waiver form and then was taken into a room with other ambitious participants. We watched a video on body positioning and how the tunnel worked and then we each took turns lying on a padded bench that curved upward like a banana. When we laid on the bench it caused our spines to curl inward like a scorpion. This arched body position is what we had to maintain as we were in the tunnel. As I laid on the bench, the instructor continually told me to arch harder until it felt like my feet were going to touch my head. Eventually he gave me the thumbs up and said “that’s it, that’s what you need to do in the tunnel”. I take it back, this doesn’t seem easy anymore.

Once my spine was limbered up I was given a jumpsuit and a helmet to wear. There were six of us in the crew and the instructor told us that we would each fly for one minute and then cycle through the rotation and fly our second minute. During the instructional video they told us how to position our bodies to stay still and how to use our arms and legs to adjust if we began to move around. Before we started flying I asked the instructor if I would be able to do a backflip when I was in the tunnel. He chuckled and said “No, not today”. I still didn’t think it looked that hard until I stepped inside the tunnel for the first time.

As soon as I stepped inside the tunnel, everything felt foreign. I was floating instead of walking and every little body movement sent me off in a different direction. My instructor did his best to stay in front of me and give me hand signals to help me adjust my body position. When I began to float towards the wall he would grab me before I collided with it. It was impossible for me to maintain a heading and I slowly spun in circles like a windmill. As soon as he guided me over to the exit and my feet landed on the floor I realised why he chuckled when I asked about doing a back flip. It was much harder than I expected. 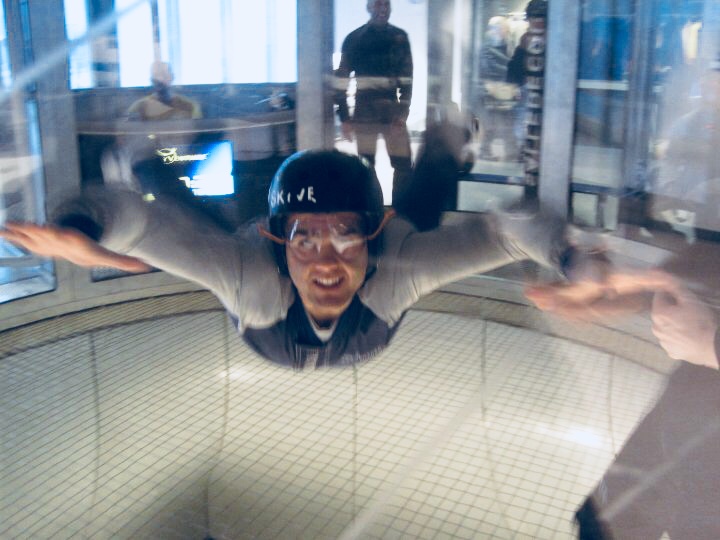 I sat in the little waiting area as we moved through the rotation and the other participants had their turn. I was a bit more prepared going into my second flight in the tunnel. The instructor helped me in and placed me in the centre of the tunnel. This time I was able to stay in the centre of the tunnel and practised moving my hands to deflect the air and maintain a heading. I was still spinning like a windmill but not as badly as before. Michele had a great time as she watched from the outside and snapped pictures of my wind-blasted face.

Flying it the wind tunnel was a great experience but I learned that I would have to do it a few more times before I could attempt a back flip. When I first booked in for two minutes it did not sounds like a lot of time but the whole experience lasts over an hour. In those two minutes my mind was racing and trying to focus on every part of my body and how it was affecting me floating in the column of air. It is not easy and two minutes is enough for your first time. A must do for anyone who enjoys a good thrill.

Have you been in a wind tunnel before? Let me know in the comments below.

Make sure to read my next post, [#74 Lesson] Professionals Make it Look Easy, be Prepared to be Humble, which discusses the lesson learned by completing this item. Want to be notified when new blog posts are uploaded? Subscribe below.