Skip to content
04Jul 2018 by Dave Macleod No Comments

This bucket list item was completed on 22nd April 2011 in Varadero, Cuba.

Going to the Caribbean in the spring of the year is a very popular thing for North Americans to do. The Caribbean is our little place of sunshine and warm water that we yearn for after enduring a cold, dark winter. In 2011 my parents decided that we should go to the Caribbean as a family because we had not had a family vacation since my brother and I started our university studies. My dad had done his research and determined that Varadero, Cuba looked like a great spot for us to explore.

When going to the Caribbean, it is common to book a travel package and stay at an all-inclusive resort. We booked our package through a travel agent, which included flights, accommodation, meals and alcohol. Yes, alcohol. All the alcohol you want. The items that are not included are tips, excursions and purchases made outside the resort. We had never been to an all-inclusive resort before and were excited to experience it.

Our flight landed at the Varadero airport and we were welcomed by numerous buses and tour guides. Almost everyone on the plane was going for the exact same reason as us but they were disbursed across the dozens of resorts in Varadero. We were ushered onto a tour bus and began making our way to the resorts. Our tour guide offered us some useful information and facts to get us started in Cuba.

Cuba has two currencies: Cuban Convertible Pesos (CUC) and Cuban Pesos. CUC are used by visitors and have a similar strength to the USD and CAD. Cuban Pesos are used by the Cuban people. As Cuba is a communist country, the distribution of resources, goods and services is controlled, therefore the Cuban Peso does not have much value and is not able to be used by visitors. We were warned to make sure we were always given CUC and not Cuban Pesos.

Our tour guide also mentioned that Cuba has two national sports: baseball and hitchhiking. Most Cuban people cannot afford their own car so they hitchhike and rely on those who do have cars to pick them up along the way. This also extends to tourists. Although it is not the law, there is an unwritten rule that you should pick up a hitchhiker if you have a spare seat in your rental car or on your scooter. For this reason it is very safe to pick up hitchhikers because none of them would dare disrupt the system. The tour guide mentioned that Cuba is one of the safest places to either hitchhike or pick up hitchhikers. 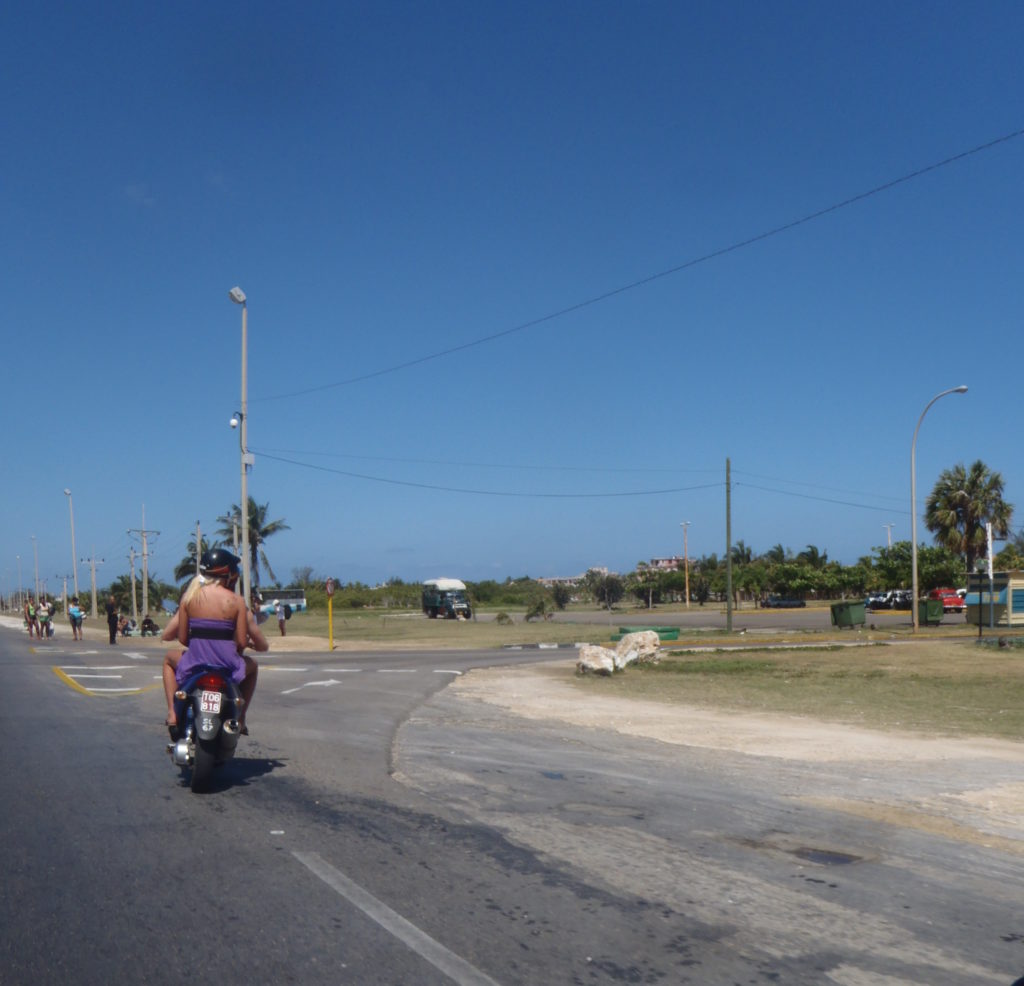 We arrived at our resort late in the evening so we only had a bite of food and a beer, then went to sleep. The next day we decided it was best to plan our excursions for the week. My brother, Galen, and I are very much alike when it comes to adventure activities so we decided to pack our schedule full of excursions and activities. We signed up for a jeep safari, Havana day tour and a catamaran tour. My parents joined us on the jeep safari and the Havana day tour but decided to leave us to sail the high seas by ourselves.

The jeep safari was packed full of fun. We drove 4×4 SUVs through the Cuban countryside and made multiple stops along the way. The stops included captaining your own motorboat along a river, ocean reef snorkelling, riding horses at a local farm and a stop at a cave to swim in the grotto. The Havana day tour was also great. Cuba is full of history and due to the embargo in the 1960’s, Cuba has been frozen in time in many aspects. A majority of the cars are either USA or Russian made and have survived since the 50’s or 60’s. To be able to walk around the city and see 57’ Chevys and Bel Airs driving everywhere was quite an experience, as if we had stepped off the plane in a different decade. 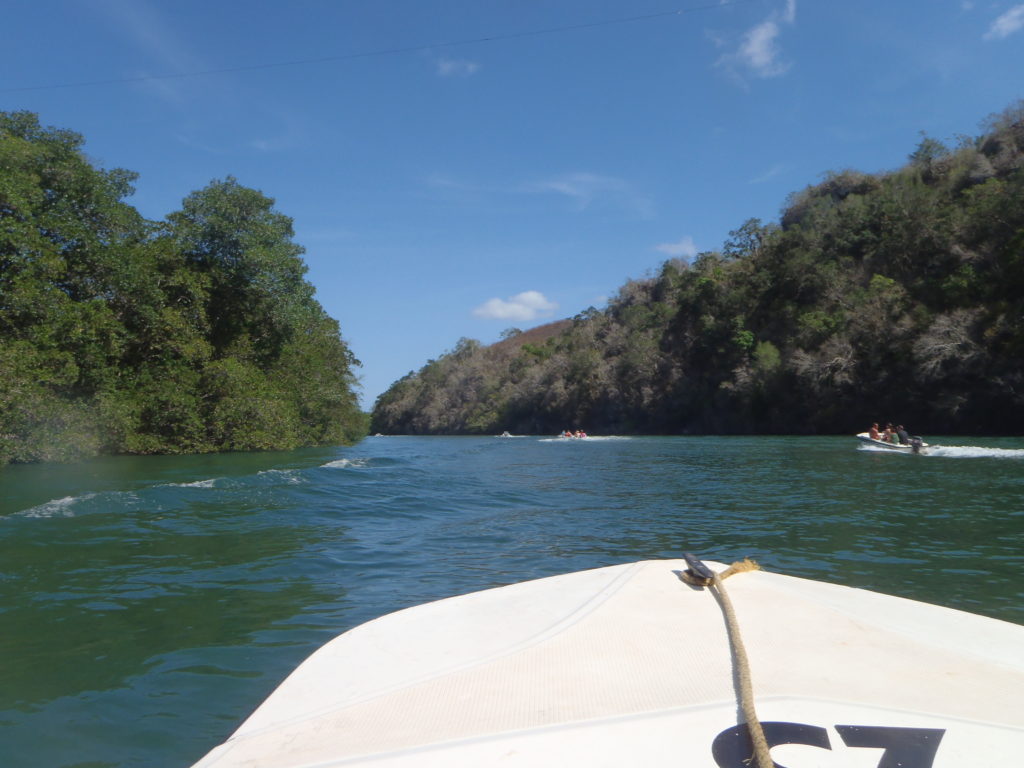 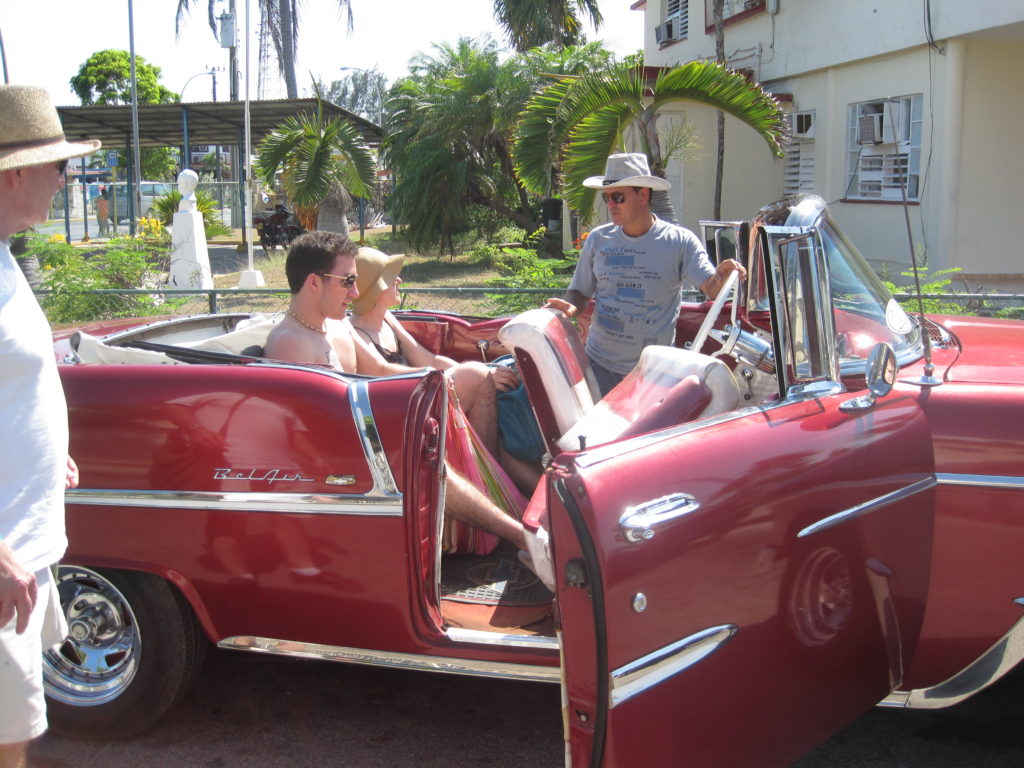 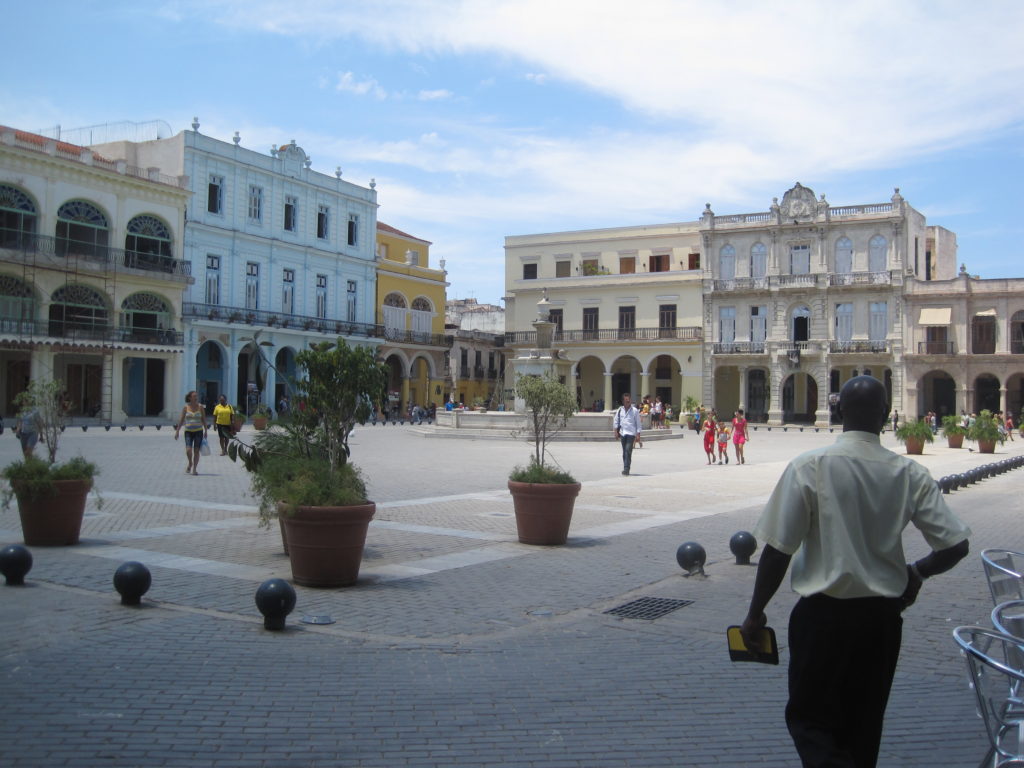 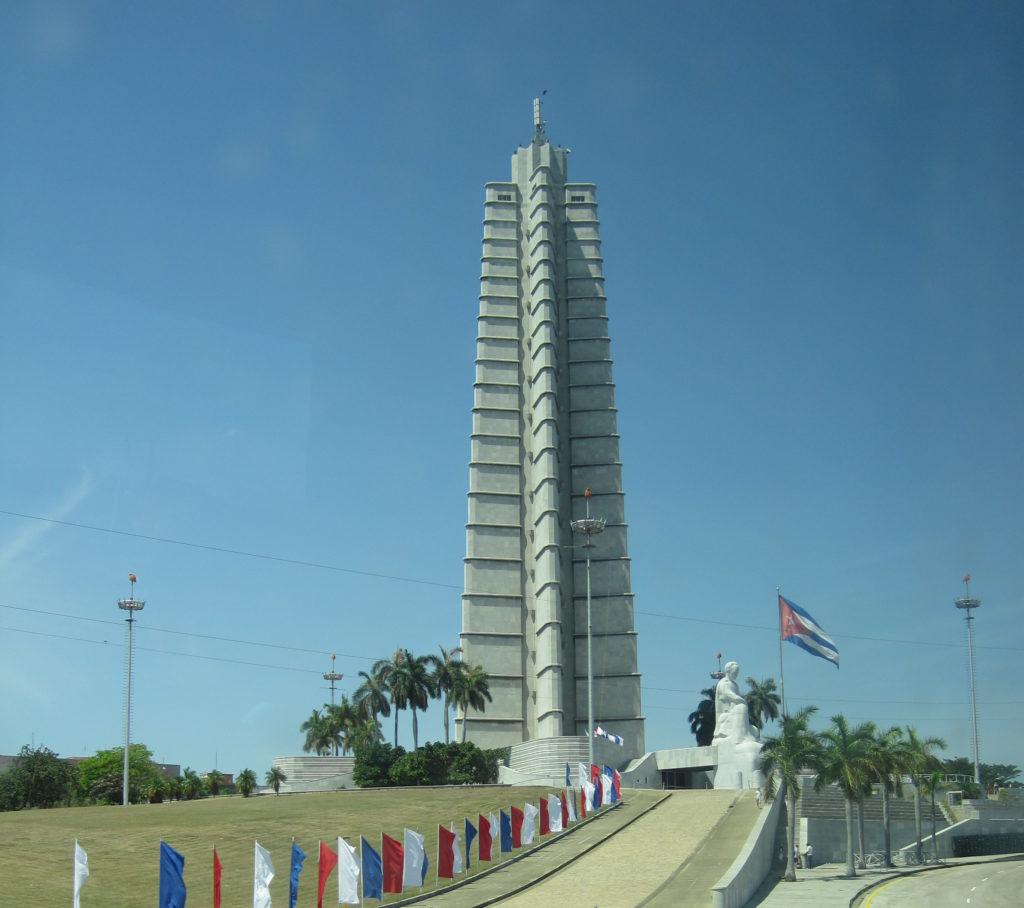 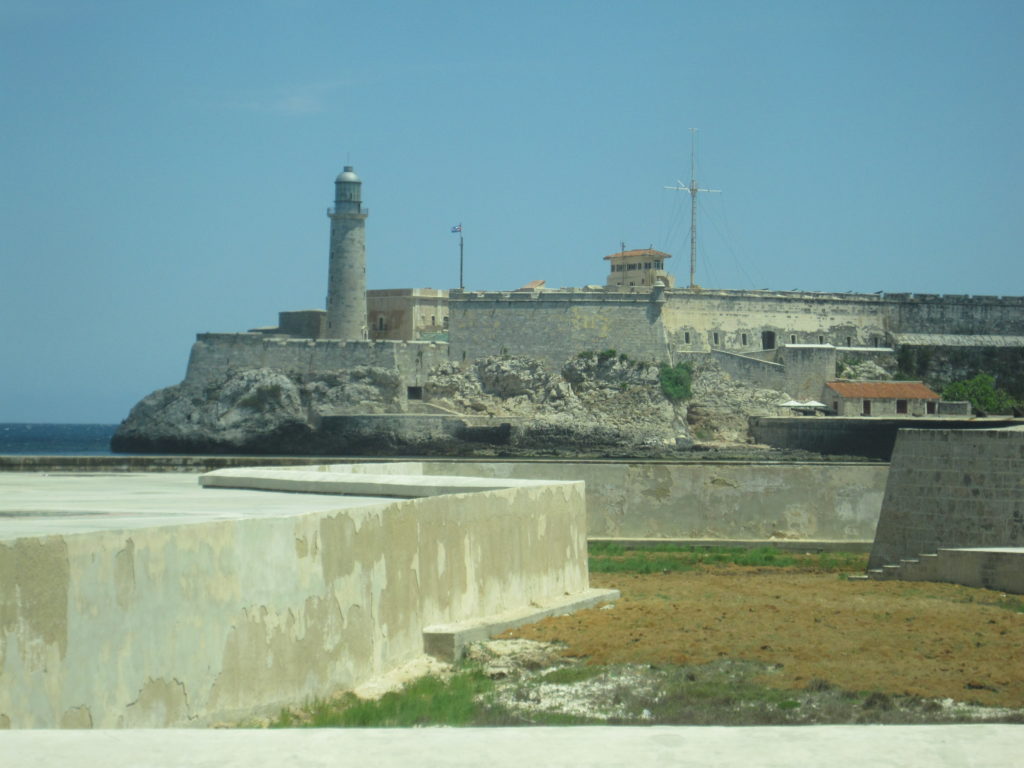 On the morning of 22nd April, Galen and I were picked up in front our resort and taken to a marina at the end of the peninsula to hop on our catamaran. The tour promised a dolphin show, which is why I wanted to go but it also offered reef snorkelling and a beachfront lunch on an island. We left the marina and sailed out into the open ocean. While we were aboard the catamaran, all drinks were included for the day. We had a few drinks and laid on the nets at the bow of the boat as we cruised to our destination. 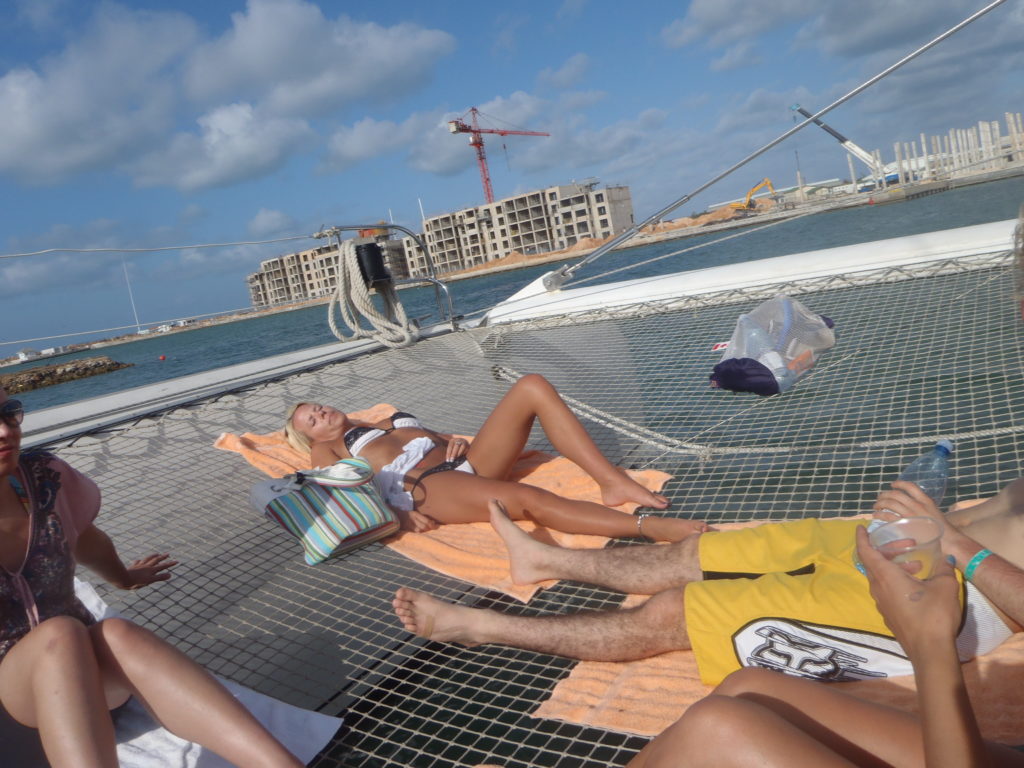 When we arrived at the dolphin sanctuary, it was like something out of the movie Deep Blue Sea. A massive area of open ocean was contained by a concrete structure. The concrete structure formed the perimeter of the pens that the dolphins lived in. There were multiple pens and trainers operating at each one. We stepped off the boat, onto the dock and made our way up to the perimeter wall. From the wall, we were guided down a set of stairs to a submerged platform. When I stood on the platform the water level was up to my stomach. This allowed the dolphins to swim up to us and be at arms level. There were 10 of us standing in a line, facing out toward the pen and the dolphin swam slowly in front of us so we could all hold him for a brief moment. 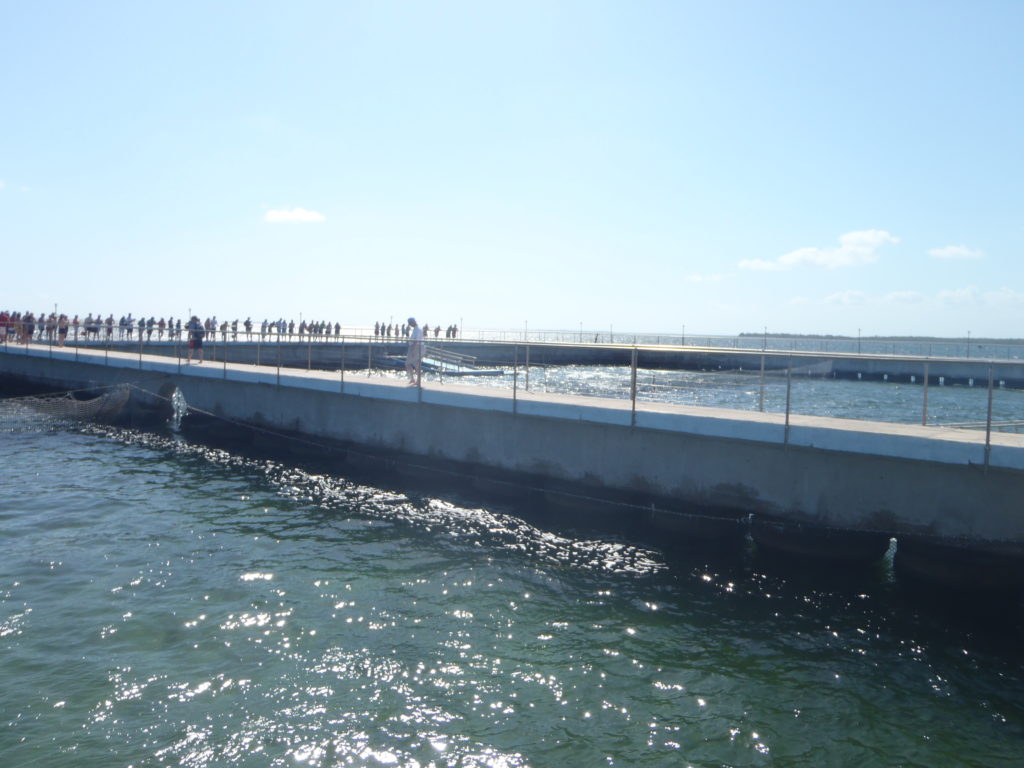 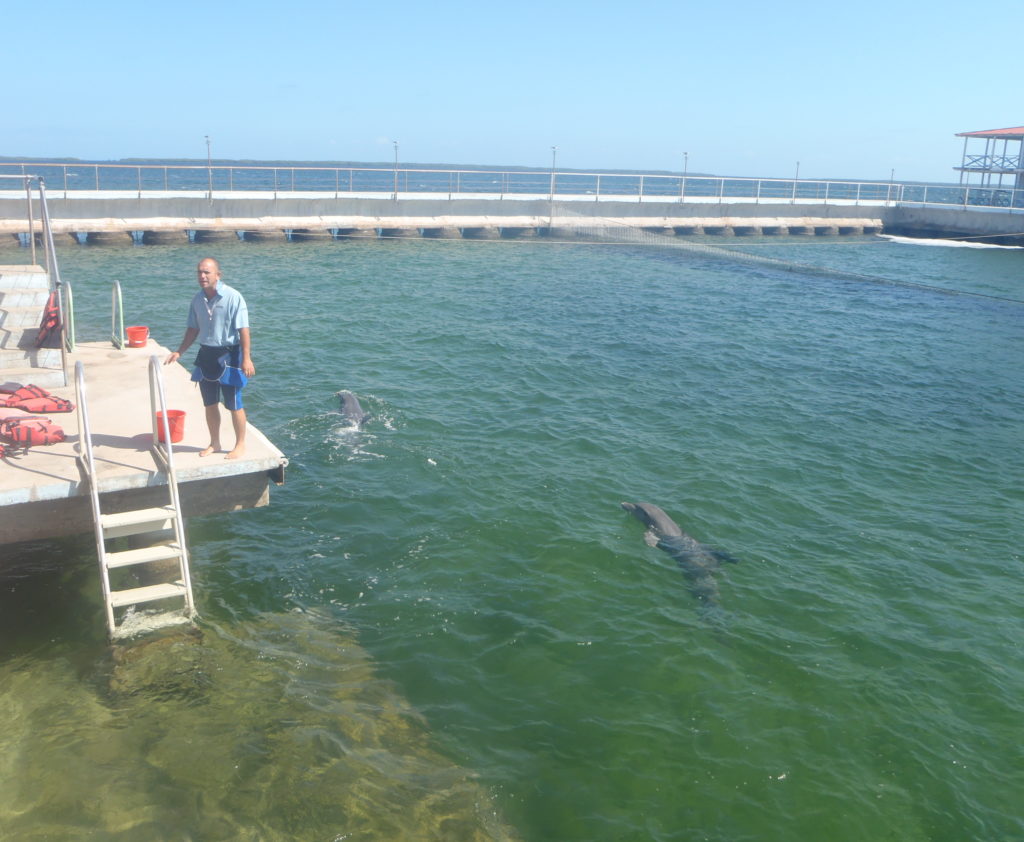 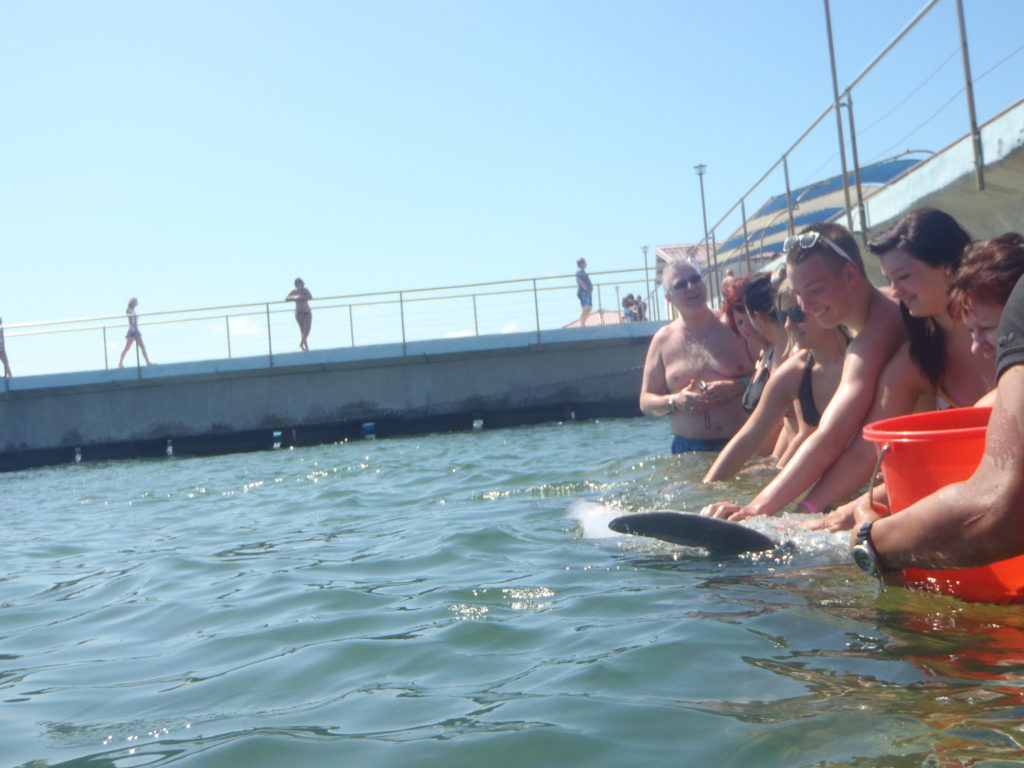 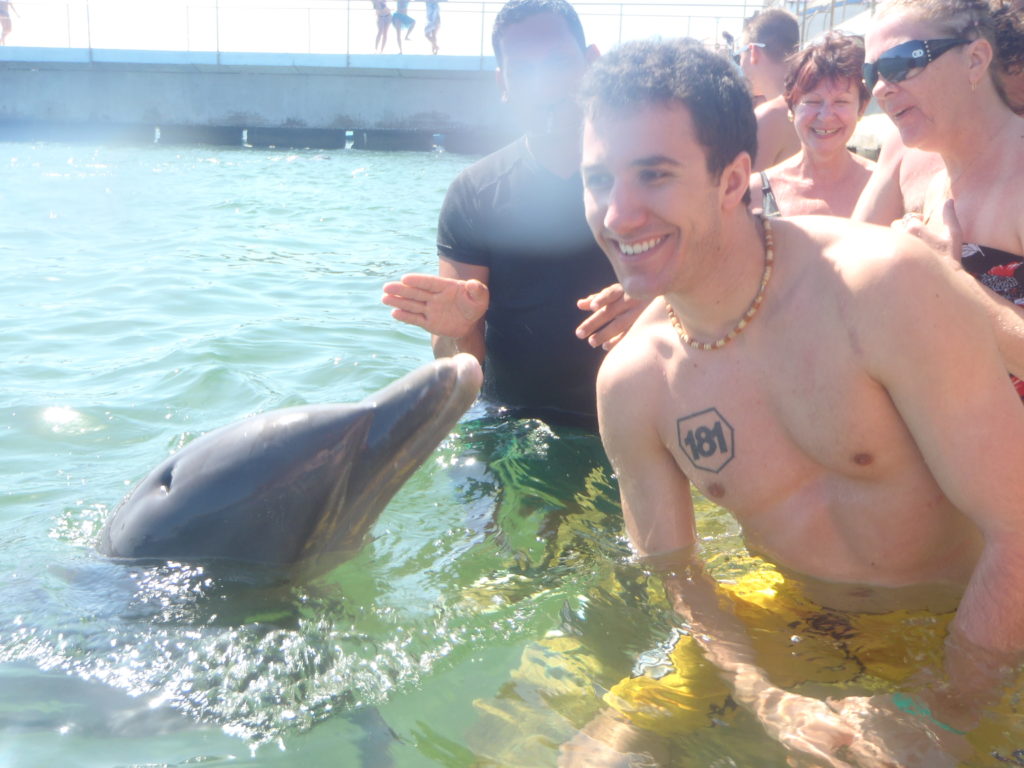 The dolphin’s skin was interesting to feel for the first time. It had a rubbery texture but also felt soft and squishy. The dolphin was used to tourists and appeared to enjoy being held by us. The trainer instructed the dolphin to perform a show for us and he came back to claim his bites of fish as a reward for doing his flips and tricks. At the end of the show my brother approached the trainer and asked if we could swim in the pen with the dolphin. At first he said no but then my brother offered him $10 CUC and his answer immediately changed to yes. Tips go a long way in Cuba and are very appreciated by the people in the tourism industry.

As the rest of the group made their way back up the stairs to the perimeter wall, we stayed on the platform with the dolphin. My brother went first and followed the instructions given by the trainer. He instructed us to hold onto the dolphin’s two pectoral fins as if we were holding hands with another person and facing them.

When Galen had a firm grip on his fins, the dolphin fell backward into the water and pulled Galen along. The dolphin was floating belly up, with Galen on top and he kicked with his tail to propel them through the water. The dolphin swam out into the pen and did a loop before returning back to the platform. After Galen stepped back onto the platform I assumed the same position with the dolphin and he took off. He had so much strength and moved effortlessly through the water, even pulling my added weight. I had the biggest smile on my face the whole time and felt like a little kid. We thanked the trainer and gave the dolphin a few more pats before he took off and went for a swim. Another item successfully completed.

The next stop on our trip was to a coral reef to do some snorkelling and then we made our way to the island of Cayo Blanco for some lunch. The food was delicious and was accompanied by some singing and dancing by the entertainers. We were given some time to relax on the beach and let our meal settle before getting back on the boat.

Upon returning to our resort we met up with our parents and asked how their day of adventures went. They rented a car for the day to drive around Varadero and explore. They decided to fully immerse themselves in the culture by picking up a hitchhiker. He was a local and they drove him down the peninsula to his job at one of the resorts. He was very thankful for the ride and they enjoyed the cultural experience, a win-win.

Despite the hardship of living in a communist country the Cuban people are very proud. They are always happy to help others, even tourists and I never felt unsafe the whole time we were on holiday. They are a very hard working and resourceful nation, as is proven by keeping cars from the 50’s on the road today. I highly recommend Cuban to anyone looking for an enjoyable island getaway.

Have you been to Cuba? Let me know your thoughts in the comments below.

Make sure to read my next post, [#95 Lesson] Always Assess the Information Source, which discusses the lesson learned by completing this item. Want to be notified when new blog posts are uploaded? Subscribe below.

Remember to check out Launch Pad and get started on your list today!