Skip to content
01Jul 2020 by Dave Macleod No Comments

This bucket list item was completed on 17th September 2014 in Rotorua, New Zealand.

After exchanging a few emails, we had sorted out a good time for him to visit and he booked his flights. He would be coming for five weeks and wanted to experience as much of New Zealand as possible. We came up with an awesome adventure itinerary of New Zealand to make sure we packed in as much as possible for him.

Galen arrived into New Plymouth on Thursday, 11th September and we wasted no time getting into the adventures. We left the next day and drove down to Wellington. There were two things we wanted to accomplish in Wellington: scuba dive the wreck of the HMNZS Wellington F69 Frigate and watch the All Blacks play. Galen had recently achieved his scuba diving certificate so I wanted to make sure he got in the water during his trip. Lucky for us, the All Blacks were playing South Africa that weekend as well. The All Blacks and the Springboks are a classic rivalry so I knew we would be in for a good game.

We woke up early on Saturday morning to scuba dive the wreck. The sky was clear and the ocean was calm, which is pretty rare for Wellington. We were excited.

We booked our charter with Dive Wellington and I am glad we did, they were very professional and organised. We hopped on the boats with a few other divers and made our way out to the dive site. 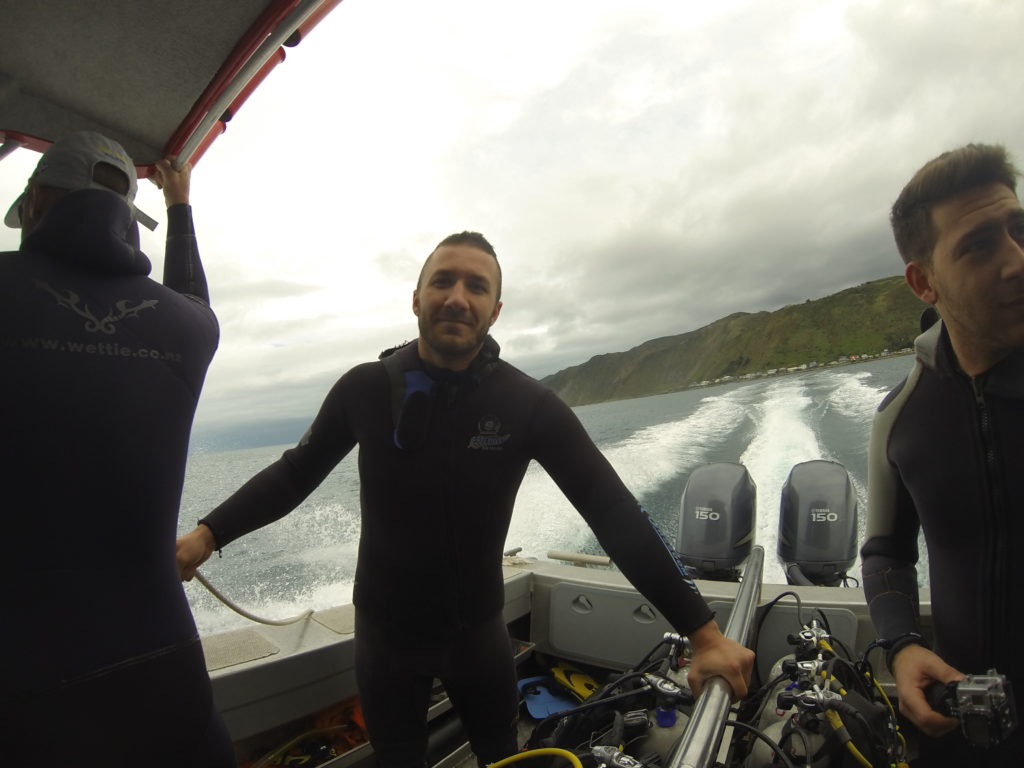 The visibility was great that day and it was easy to navigate around the wreck. I managed to get a photo of Galen sitting on the gun turret, pretending that he was shooting it. Classic scuba diver photo. There were a few openings in the hull, which allowed us to enter the wreck and swim around. This was great for Galen as he had never been inside a wreck before.

When we got back to the dive shop we helped put away all the gear and then they cooked us sausages and gave us coffee to warm up.

After we left the dive shop we spent the rest of the day exploring Wellington before returning to our hostel to get ready for the game. The hostel was full of All Blacks fans so we mingled with the other fans as we all enjoyed a few pre-game beers. One of the girls was offering face painting and Galen couldn’t resist. He got into the All Blacks spirit and had his whole face painted: one half white and one half black, with a fern running from cheek to cheek. 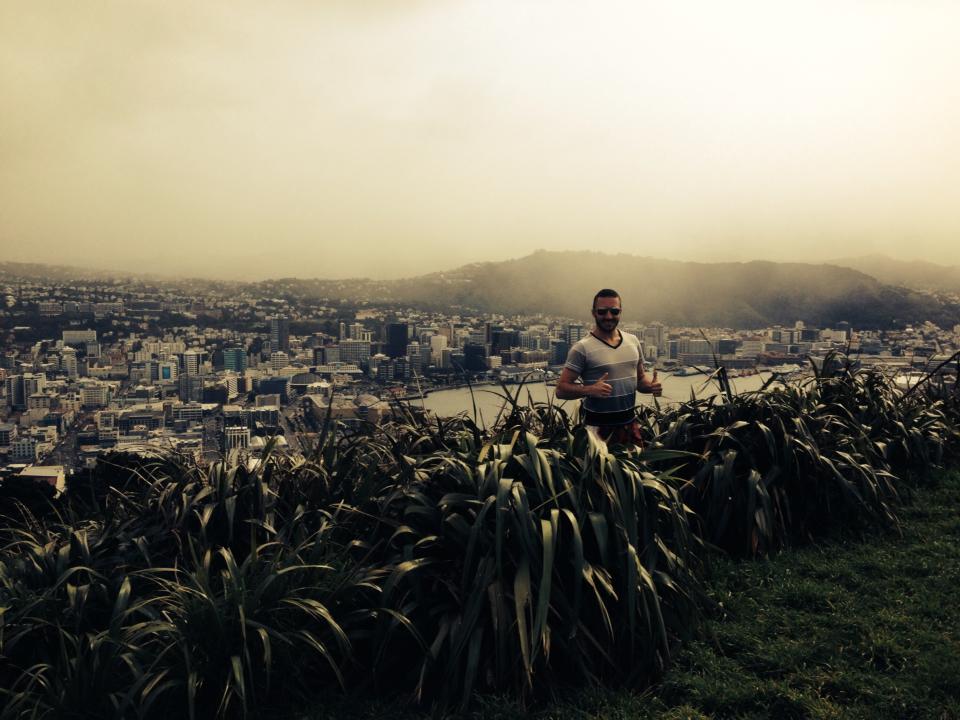 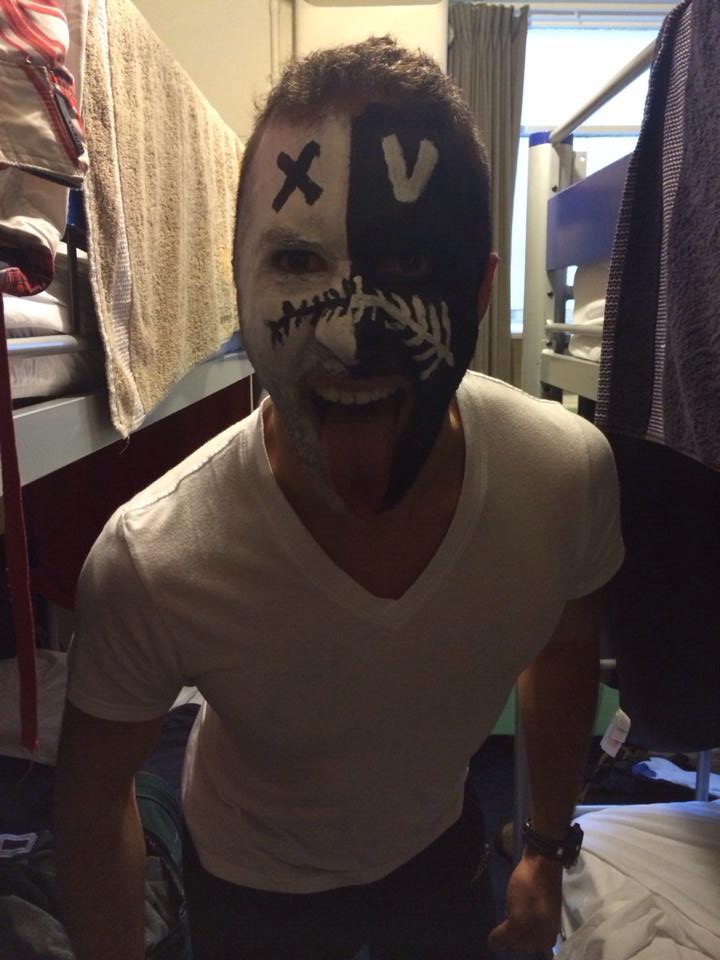 The atmosphere in Westpac stadium was electric and Galen was absorbing all of it. We had great seats for the game, not far from the try line. We watched Richie MaCaw score a try in the 46th minute, only a few rows away from us. We chanted, cheered and drank beer as we watch the All Blacks beat the Springboks 14-10. After the game we went back to the city centre and celebrated with all the other fans. Not a bad way to kick off the adventures. 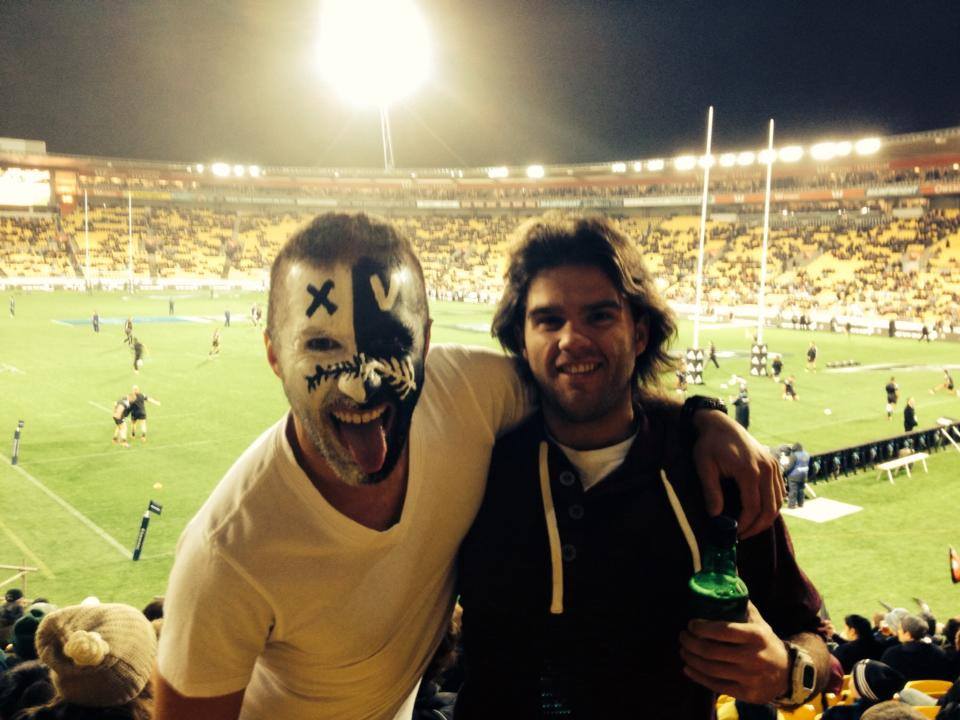 On Sunday morning we left Wellington and continued our journey up through the central North Island, stopping in Rotorua for a few days. Rotorua is an outdoor adventure hub, which offers zorbing, mountain biking, Maori cultural experiences and most importantly to us, whitewater rafting. We did a lot of activities while we were in Rotorua but on Wednesday, 17th September it was time to complete #65 on my list.

We booked in with Kaituna Cascades, to tackle grade 5 whitewater and plunge down a 7 meter waterfall on the Kaituna River. We showed up promptly and were given our kit: a wetsuit, lifejacket, helmet and a paddle. After and bit of instruction and training we hopped in their vehicles and drove down the road to the start of the river. We launched the raft, jumped in and took off. 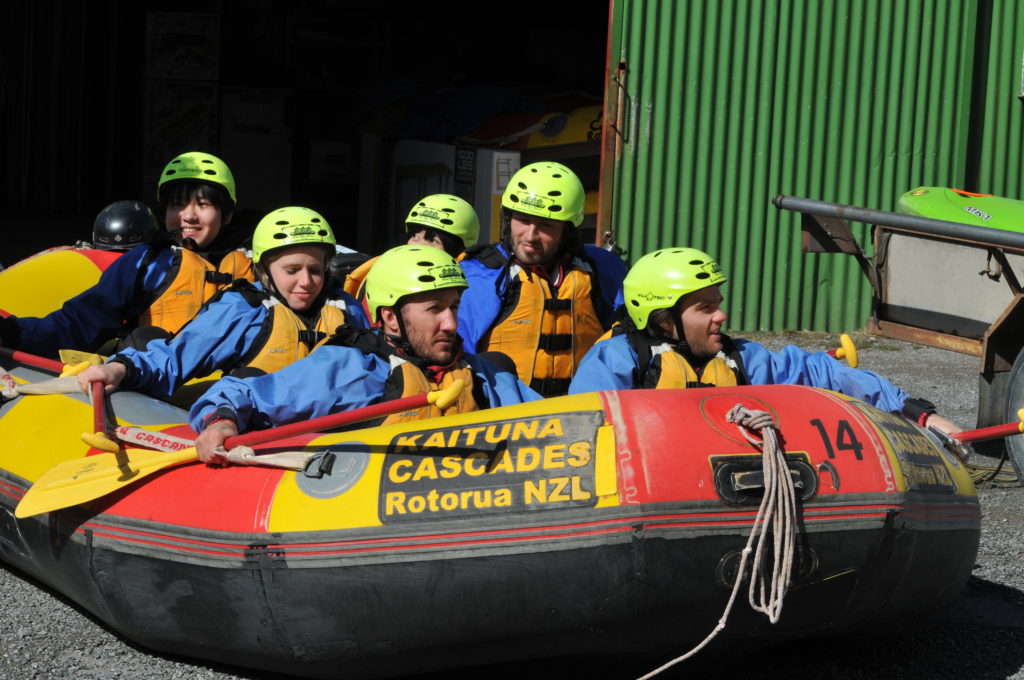 Our tour guide’s name was Toshi and he was from Japan. He did a great job navigating us through the rapids and managed to get a raft of strangers to act as one team. He cracked jokes and talked to us during the relaxed sections but, when we got into the rapids, it was all business. From the back of the raft, he shouted orders and instructions to make sure we stayed on track. 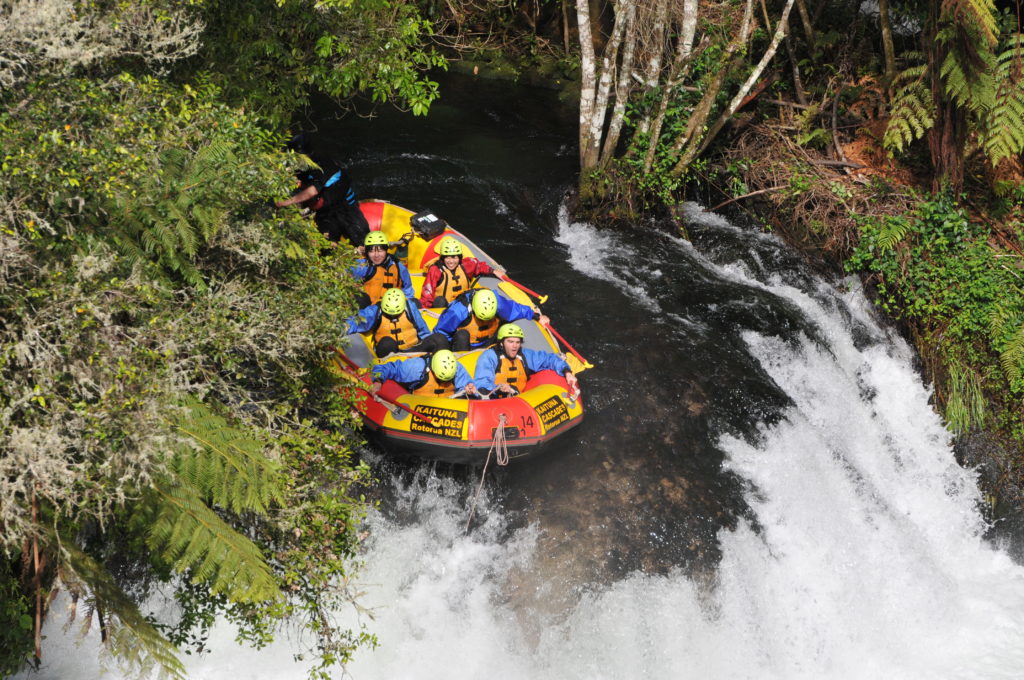 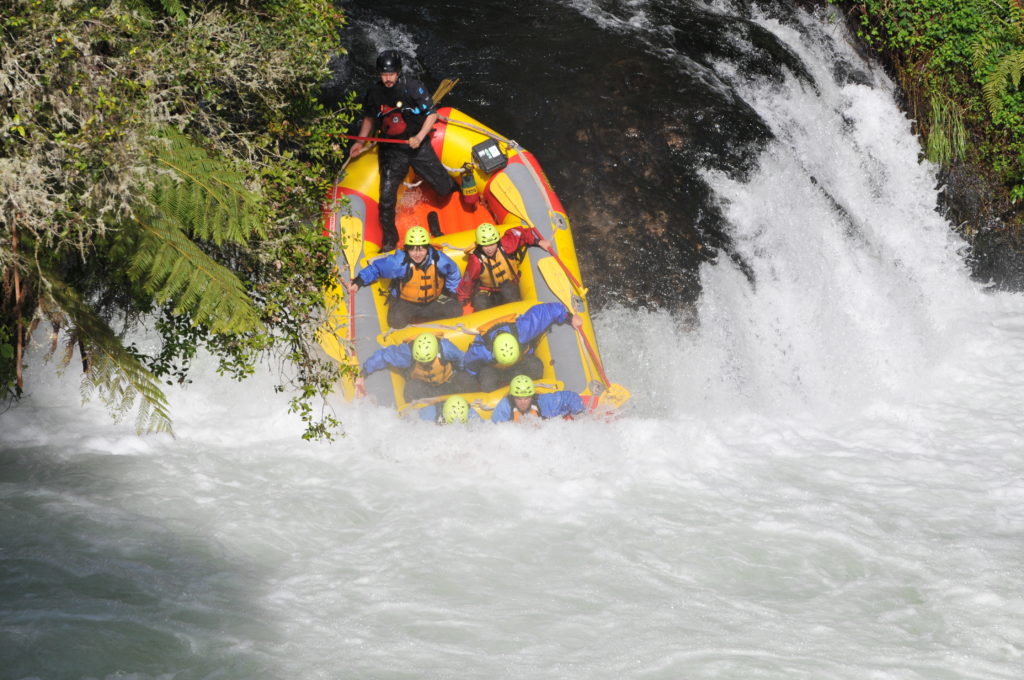 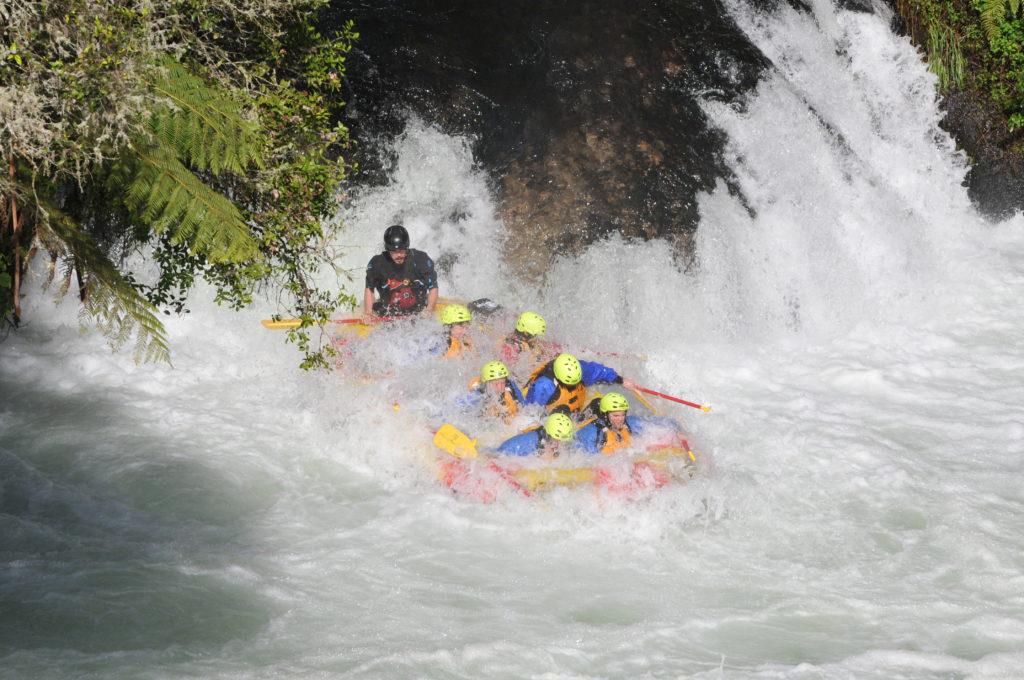 The experience lasted 50 minutes and the whole time we were on the river the thick, green New Zealand bush surrounded us. The scenery was beautiful and was almost as exciting to look at as the rafting itself. We navigated our way through 14 rapids and came out of most of them facing the right direction. The water was cold but, with adrenaline pumping through our veins, we barely even noticed it. 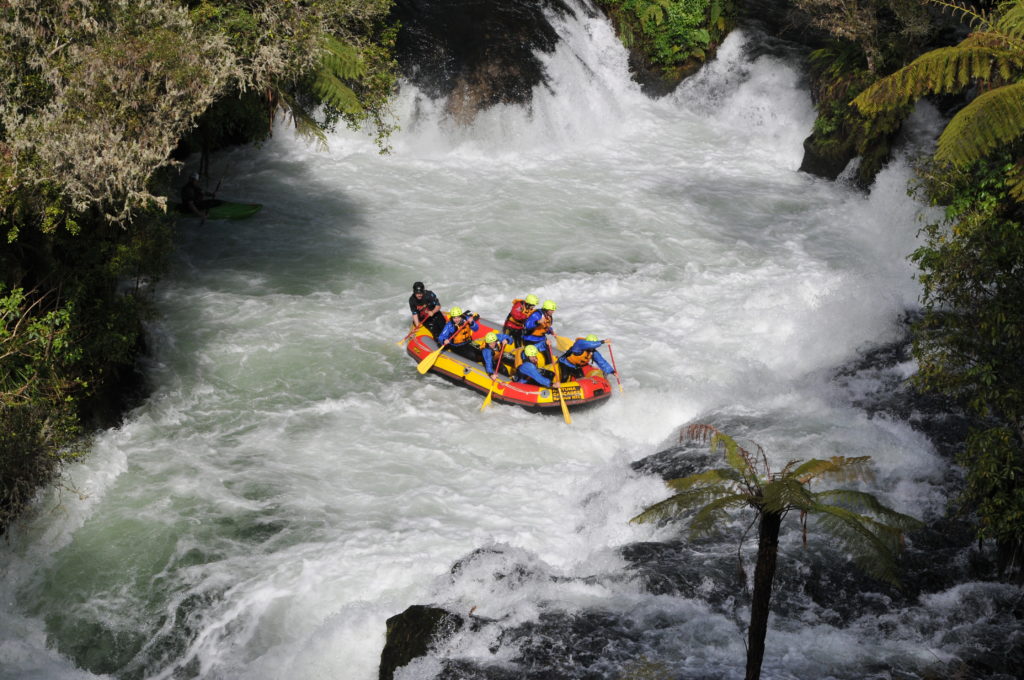 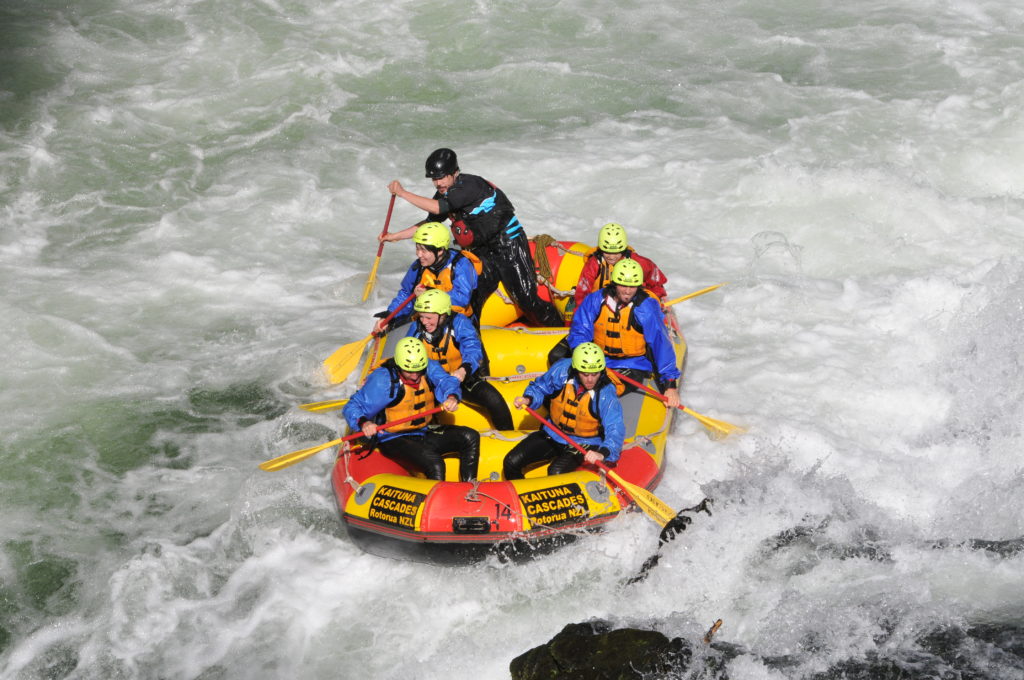 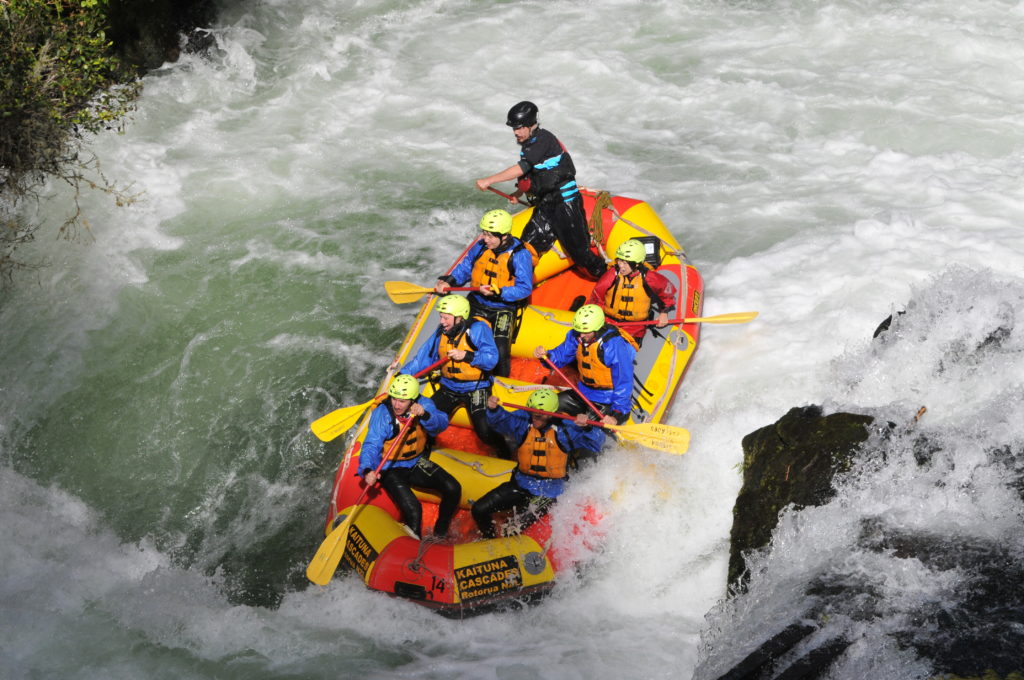 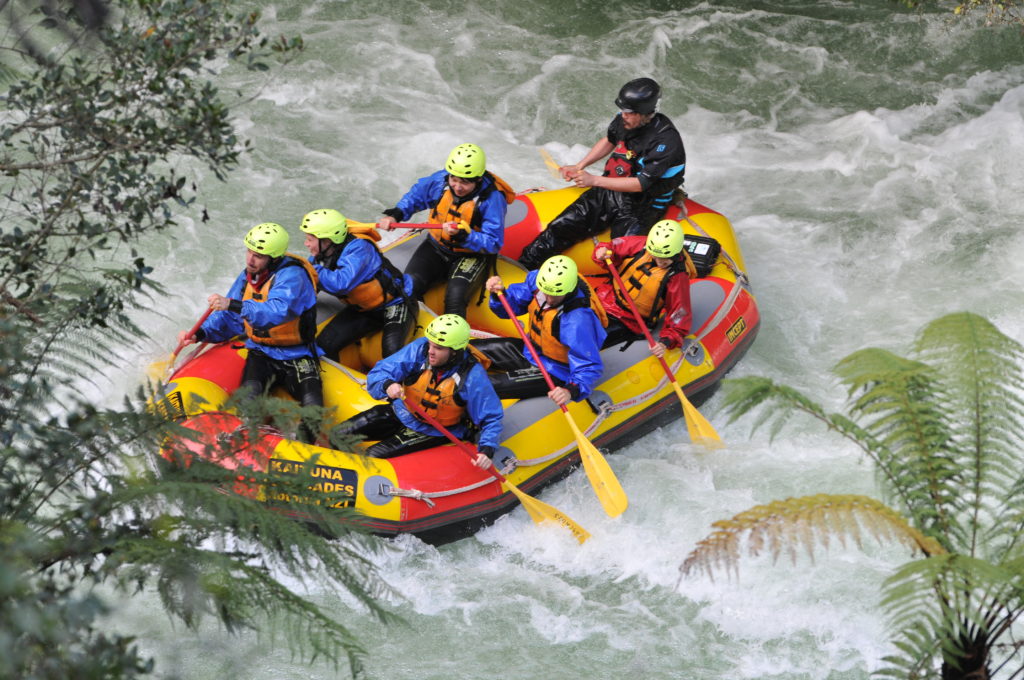 We tackled a few decent sized rapids before coming to the waterfall. During our training we were taught to bring our paddles in, brace ourselves in the raft and wait for the raft to surface after plummeting down the waterfall. When we approached the waterfall, Toshi took the last few seconds to remind us of all these points and then we went for it. Upon reaching the bottom of the waterfall, the raft dove into the pool and for a moment we were completely submerged until the buoyancy of the raft brought us back to the surface. After we surfaced and determined that no one had been lost in the process, we cheered in our triumph. 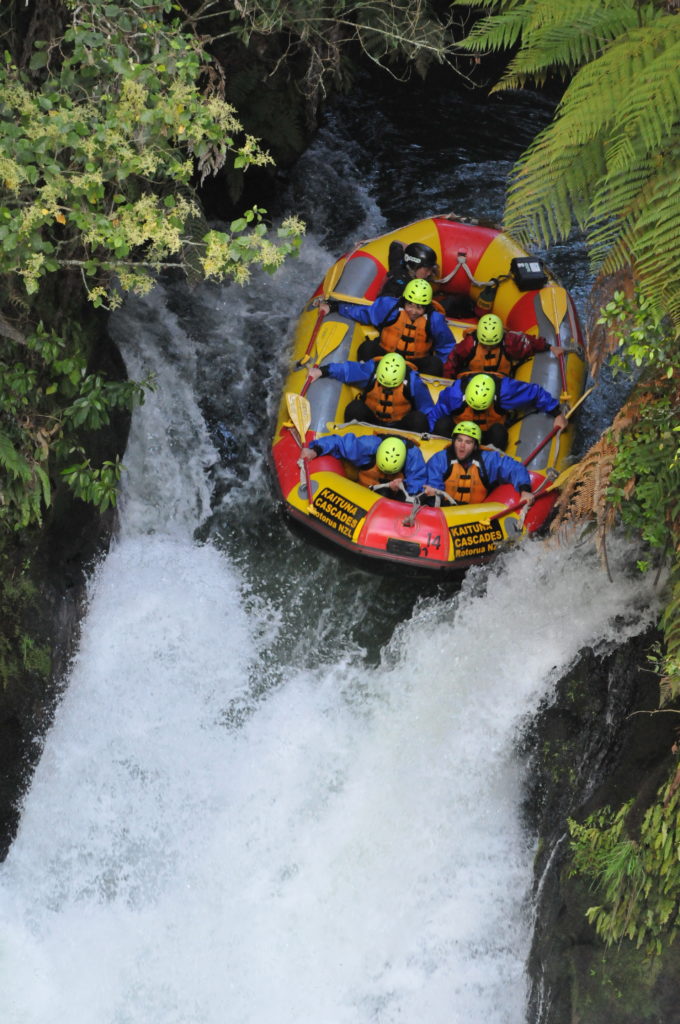 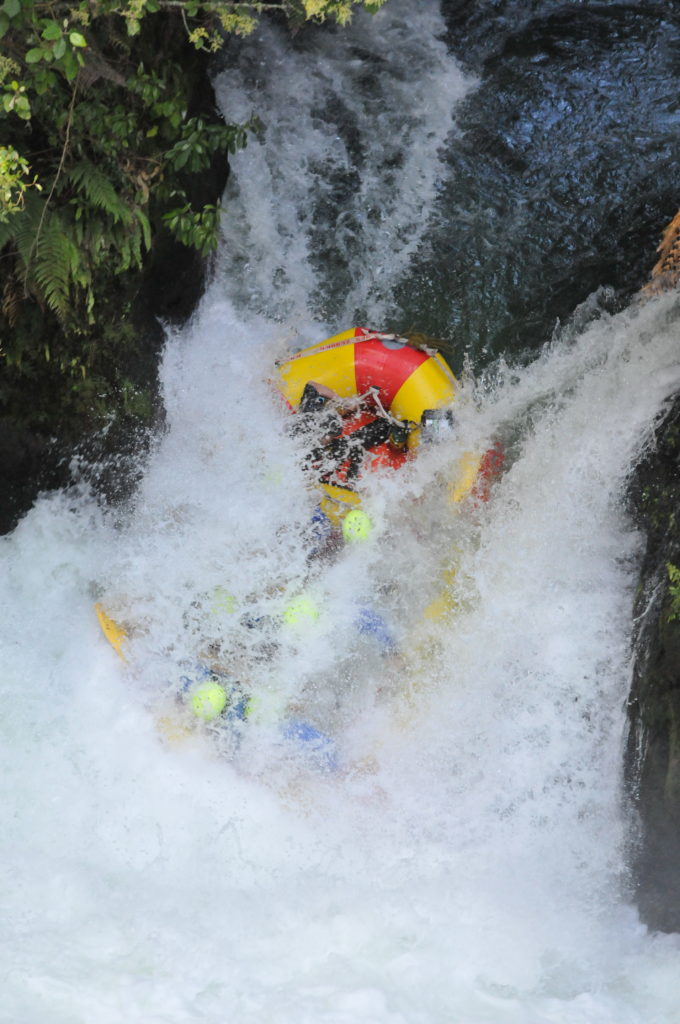 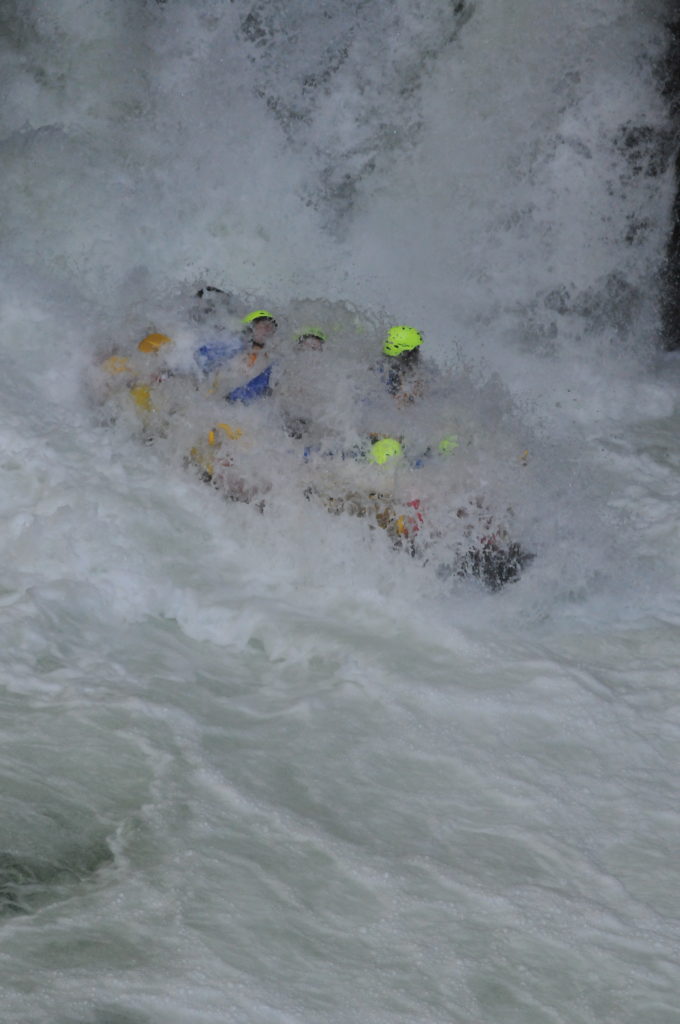 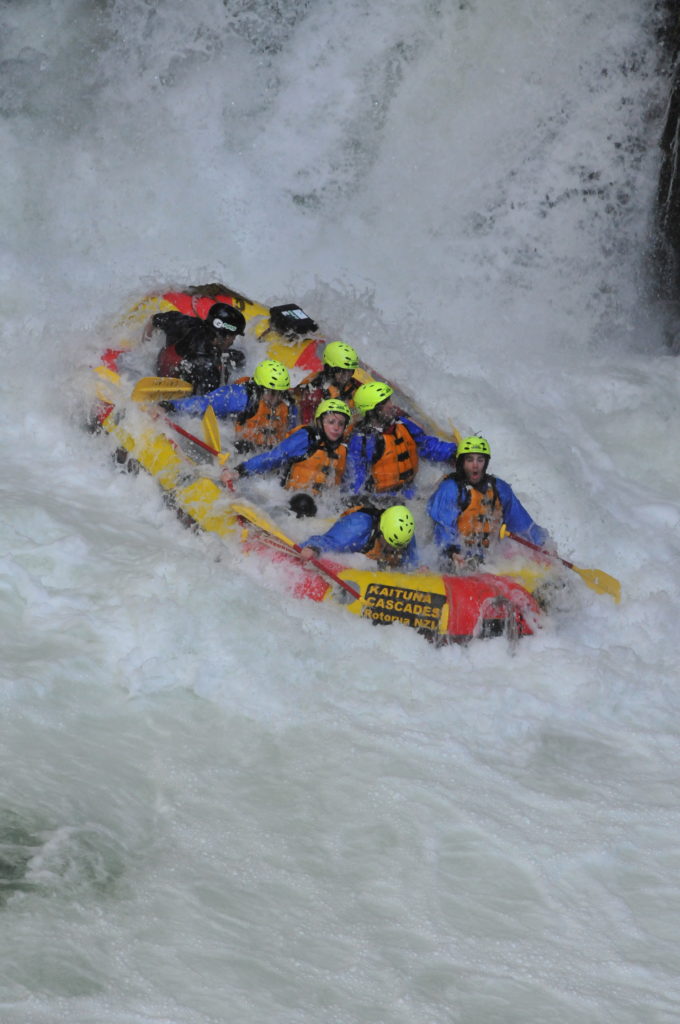 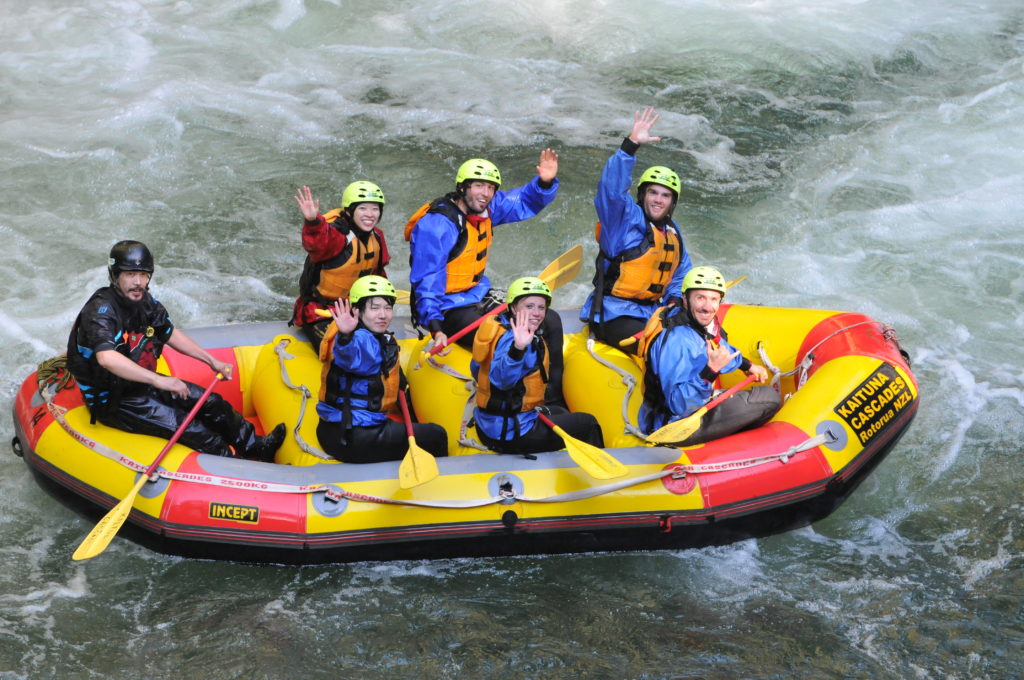 The rest of the rapids didn’t seem that scary after surviving the waterfall. We continued down the river and, nearing the end, there was a pool with a small waterfall. After going over the waterfall, Toshi had us turn the raft around and paddle back into the waterfall. As we reached the waterfall it pulled the raft closer and kept it in place by crashing water on the front of it. Since my brother and I were in the front of the raft we were pelted by the falling water. Toshi thought this was hilarious. 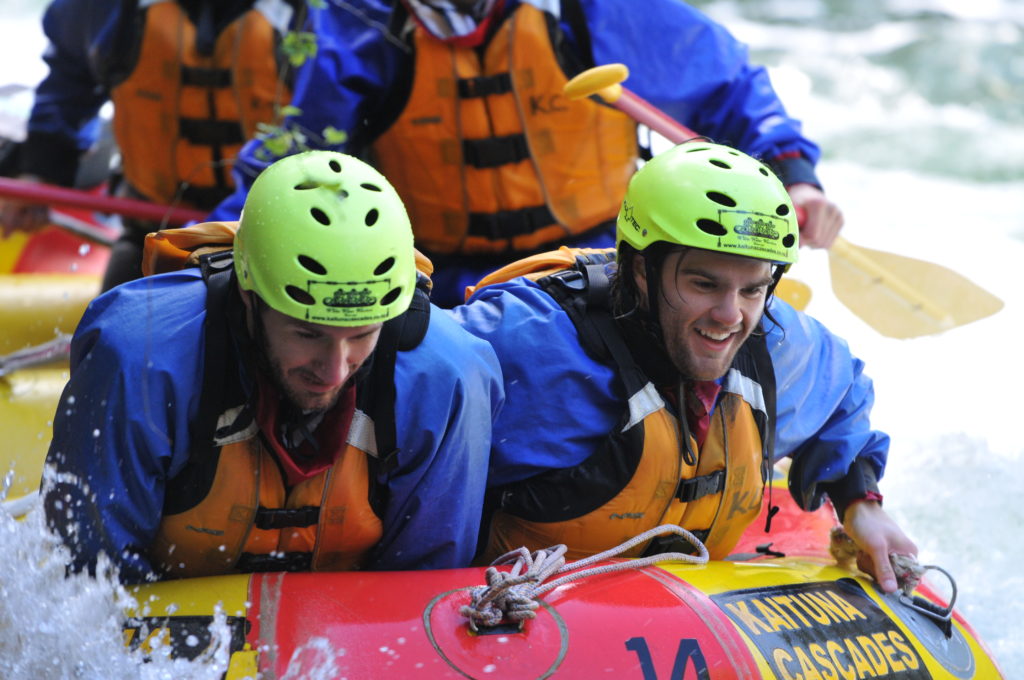 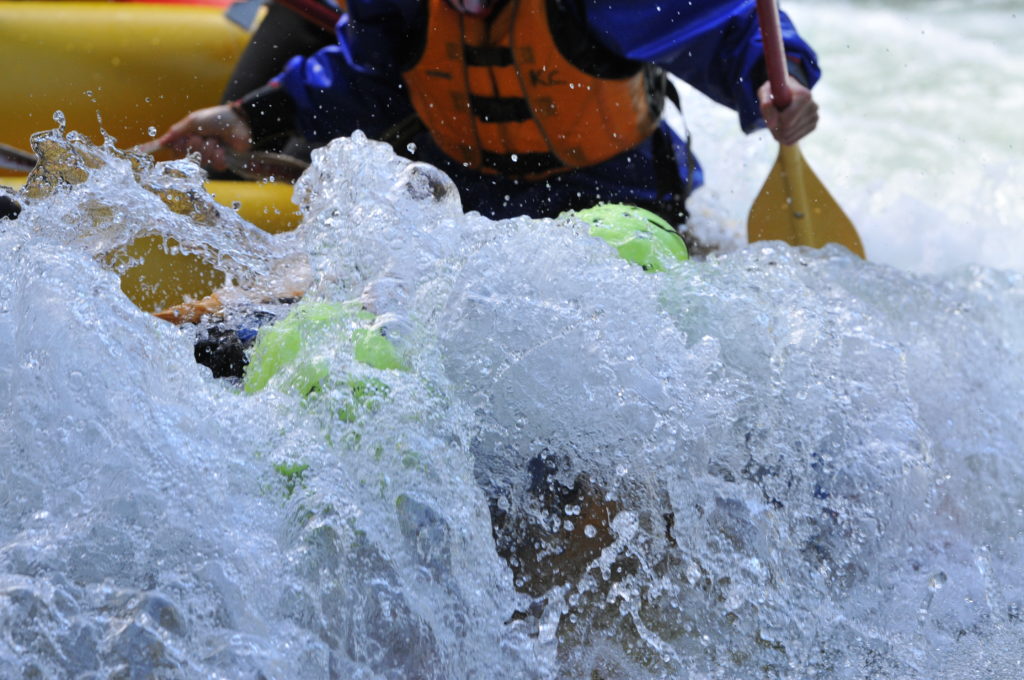 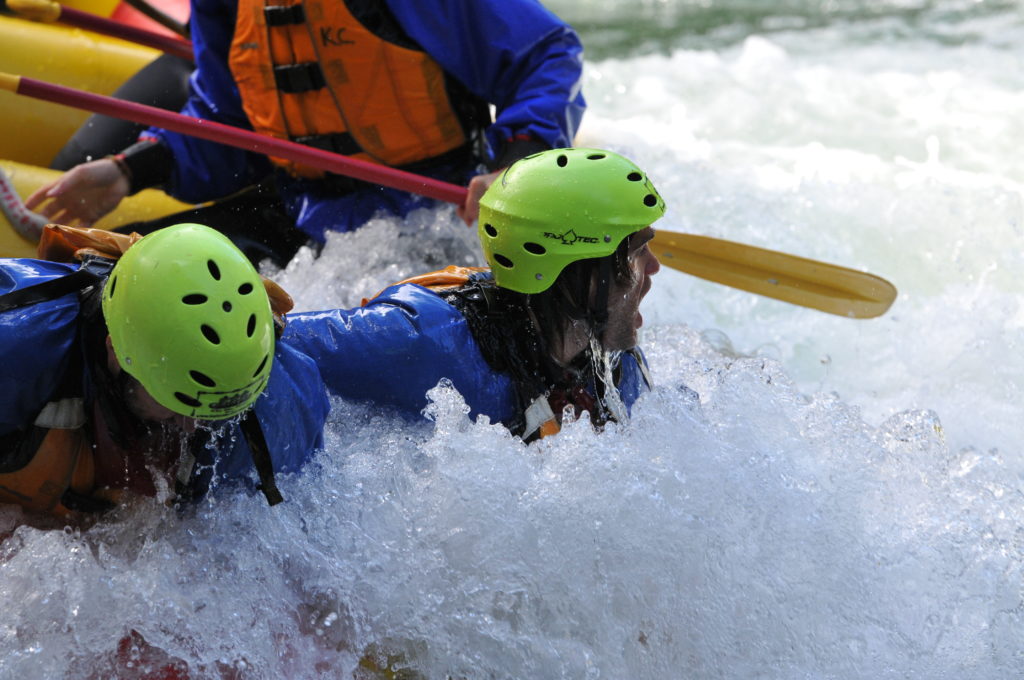 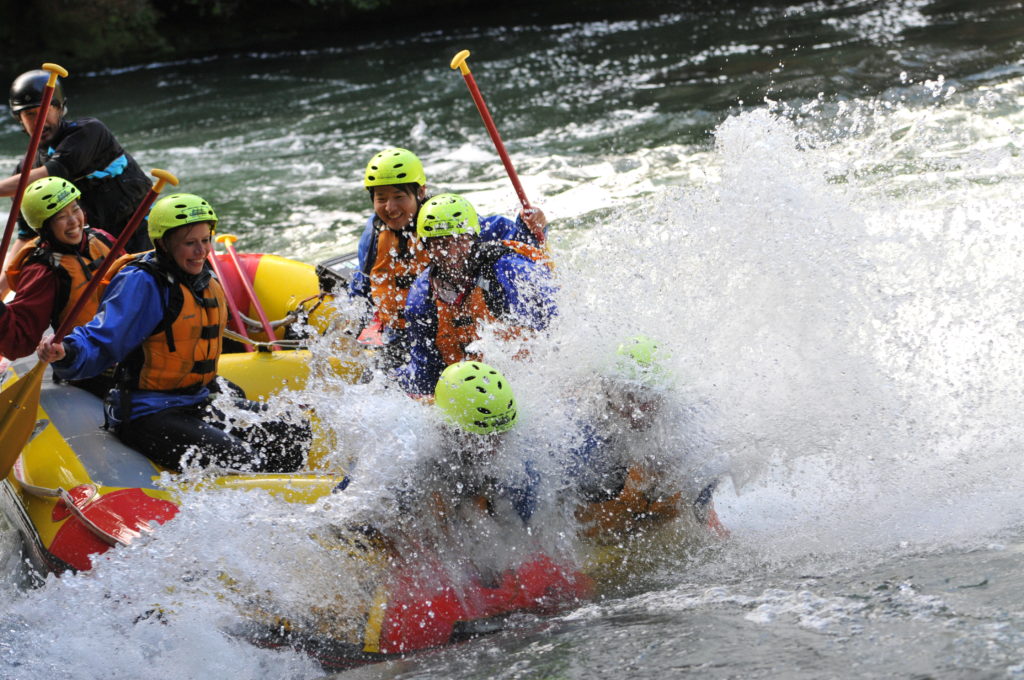 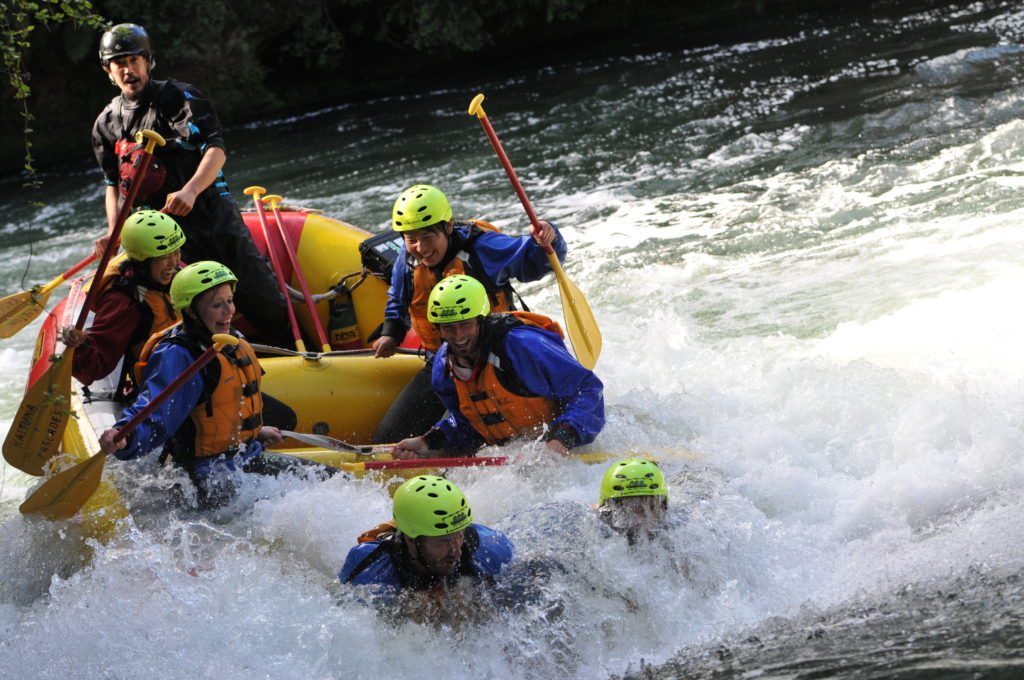 Once we reached the end of our trip we stopped the raft on the riverbank and walked up a trail to where the vehicles were waiting to take us back. There we go, #65 completed.

We arrived back to the shop, changed into our dry clothes and thanked Toshi and the rest of the crew for a great experience. It was now time to get back on the road and continue the rest of our journey. We made our way up to Tauranga, Mount Manganui and through the Coromandel. During this leg of the journey I was able to complete another one from my list, #41 Go on a Blob.

Have you been whitewater rafting before? Let me know in the comments below.

Make sure to read my next post, [#65 Lesson] Variety in Adventure, which discusses the lesson learned by completing this item and the story of #41.Want to be notified when new blog posts are uploaded? Subscribe below.

Remember to check out Launch Pad and get started on your list today!