Skip to content
15Aug 2018 by Dave Macleod No Comments

After 21, there are not many birthdays to get too excited about until you turn 30. I am still a couple years away from that milestone but this year I wanted to do something awesome for my birthday. One day I came up with the idea of the Land, Sea and Sky Birthday Extravaganza. For those of you who don’t know, New Zealand is the outdoor capital of the world! And with that kind of reputation, I intend to take full advantage of it.

I told my mate, Jesse, my idea for the LSSBE, which involved going away for the weekend and doing three different adventure activities to conquer these three environments. The destination… Taupo! 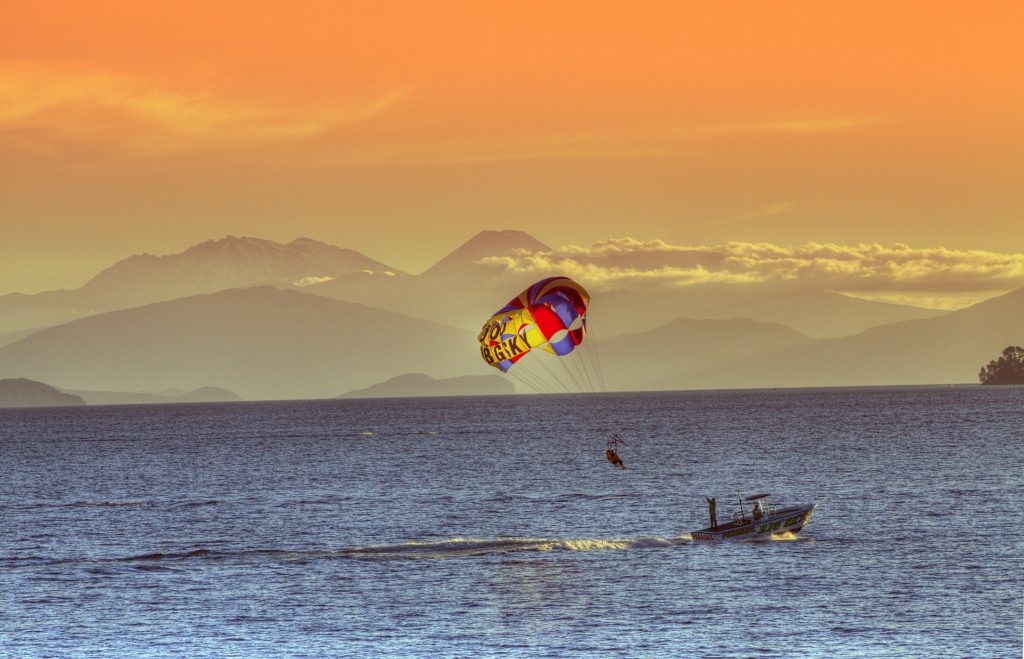 I have a group of friends, here in New Zealand, that share my addiction for adventure sports and I knew they would be keen on this idea. Jesse and I sketched up an illustration of our intentions and shared it with the group to lure them in. 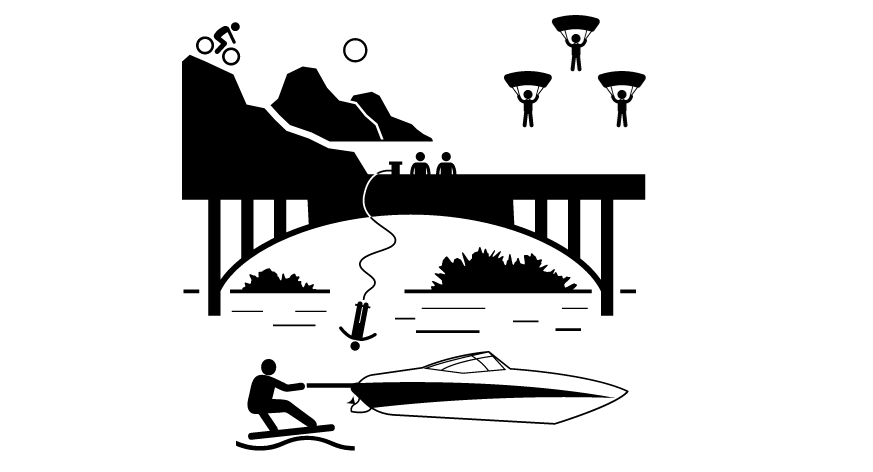 It was an easy sell for this like-minded group. Seven of us left New Plymouth on Friday night after work and drove 3.5 hours to our Airbnb in Taupo. After a big feed, it was an early night for us as the next day was when the activities were set to begin.

The first environment we set off to conquer was the sky. I would have preferred to go skydiving but that can be quite hit and miss through the Autumn months so we decided to go with something that was more of a sure bet… bungy jumping! After a big breakfast we showed up at the Taupo Bungy for our 10 am booking. 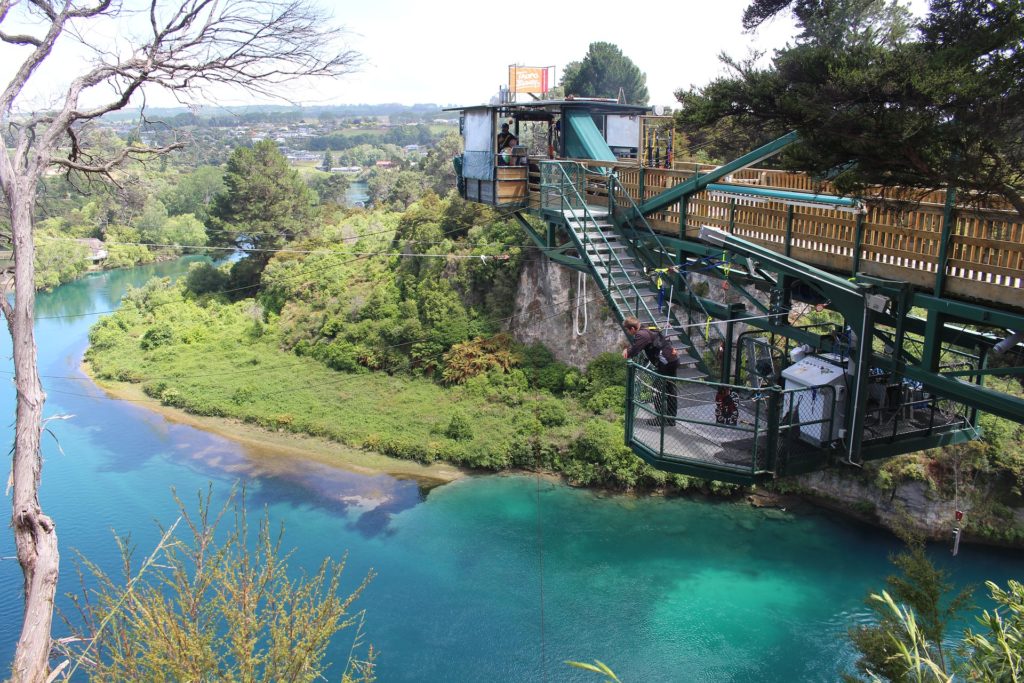 Only four of us were brave enough to take on the bungy. Thanks to Lexi, Luke and Jesse for joining me! I was the only one who had ever gone bungy jumping before so I was anxious to see the reactions from the other three. Lexi’s fear of heights made for some good entertainment for the rest of us as she neared the edge and left the platform (with a little help from the bungy technician). 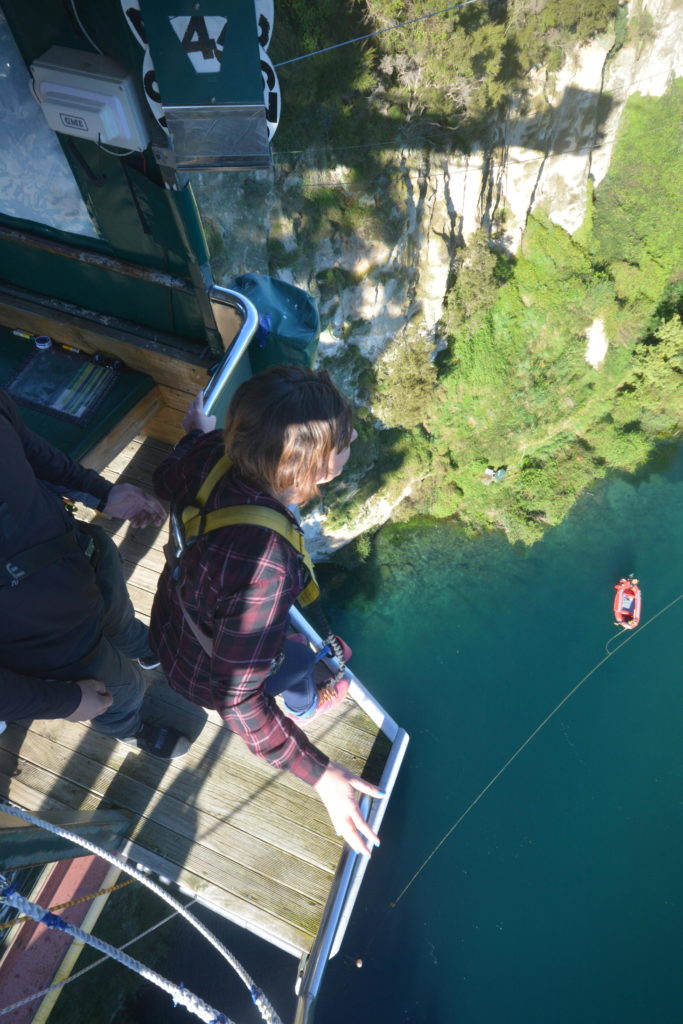 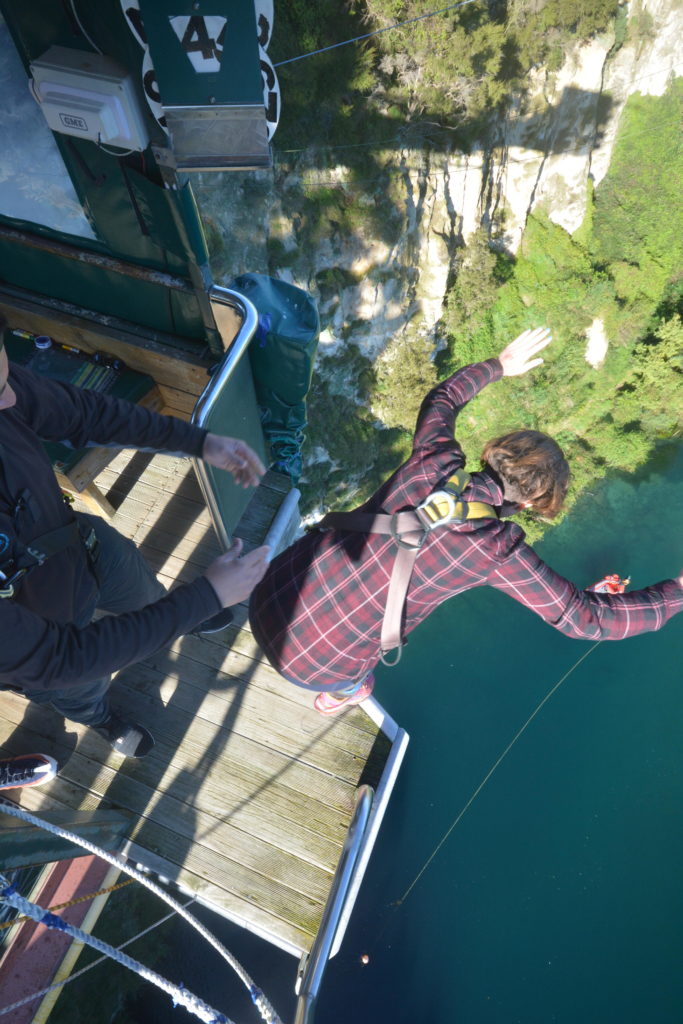 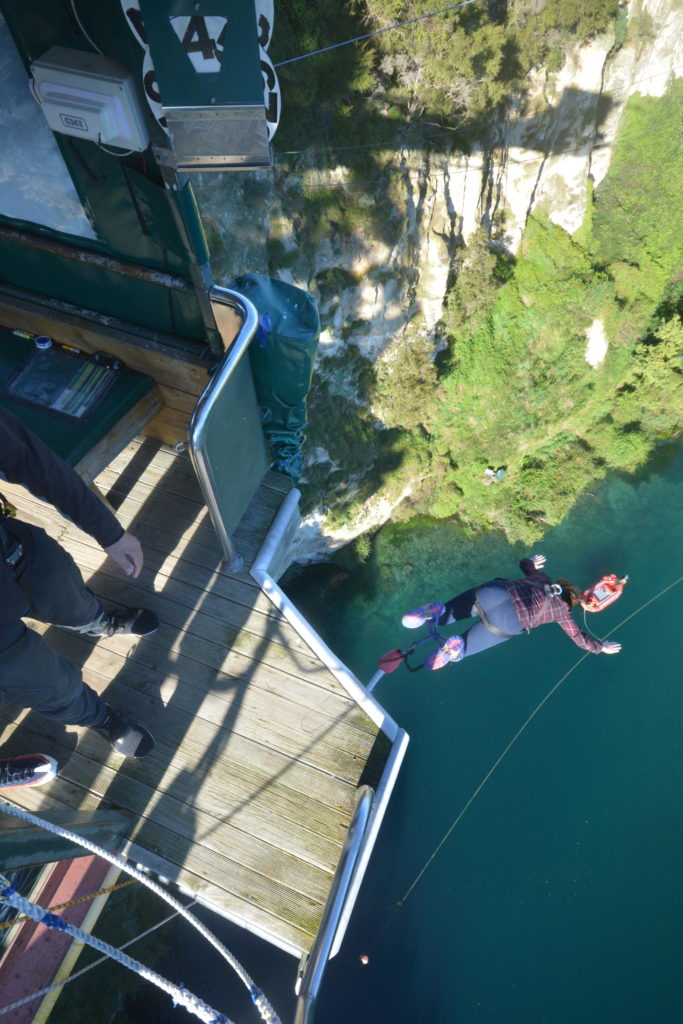 After Lexi was safely on the ground it was my turn. I have no problem jumping out of planes but bungy jumping is terrifying. But it is definitely worth it! I decided to add some style with a couple flips to make it look like I wasn’t scared. 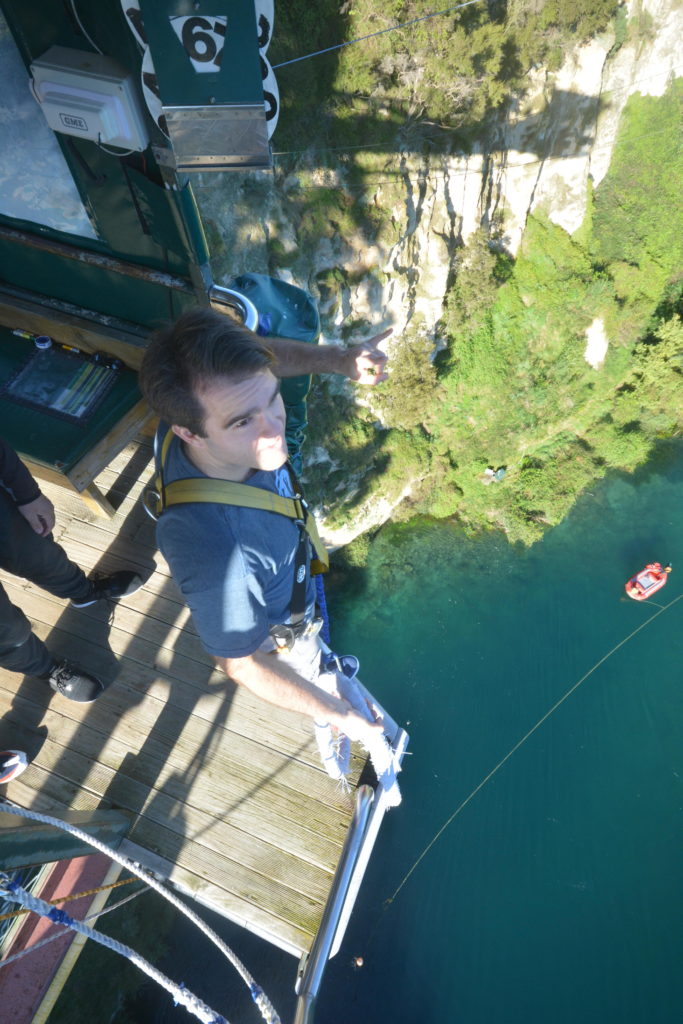 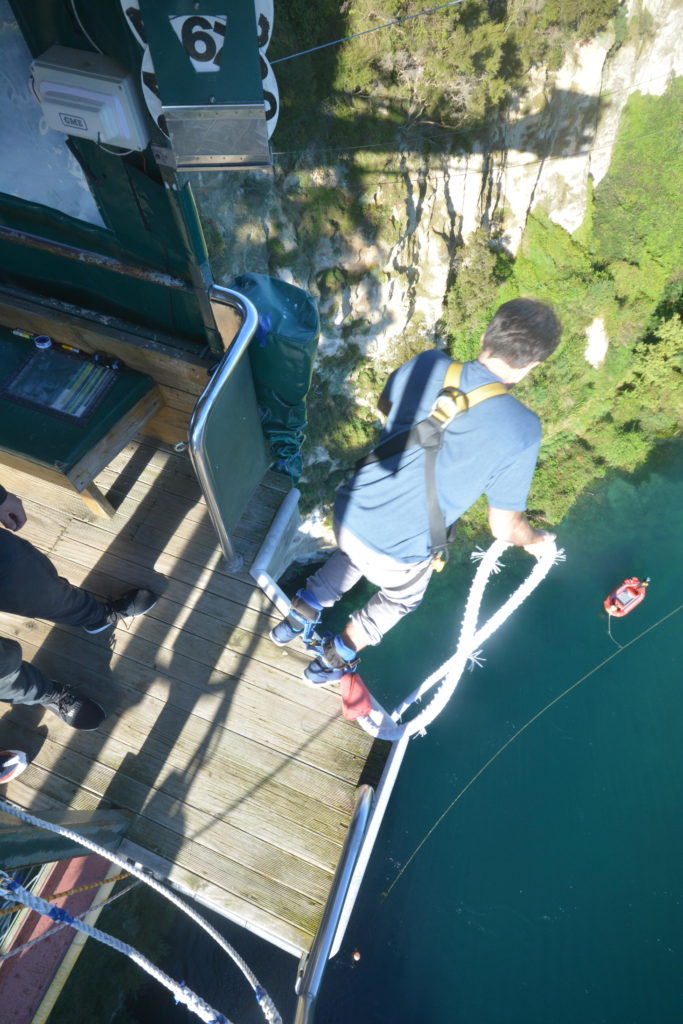 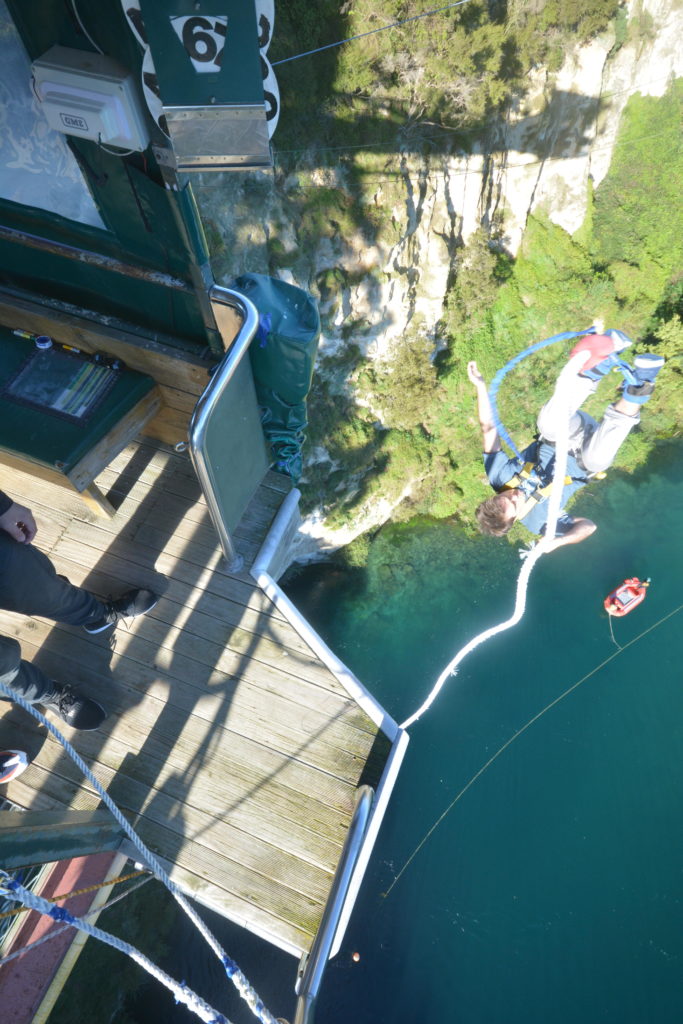 Once I was back on the ground I looked up at Jesse as he stepped to the edge. He had a blank expression on his face but he didn’t look scared, just anxious to see what it was all about. Jesse asked for a “little dunk” into the river and, as he neared the surface of the water, we watched as his upper body disappeared into the river and soaked him all the way to his mid-thighs. It was a cool morning but, when he joined us on the picnic table, he quickly stripped off his shirt and wasn’t bothered by the temperature. Adrenaline was heating him up. 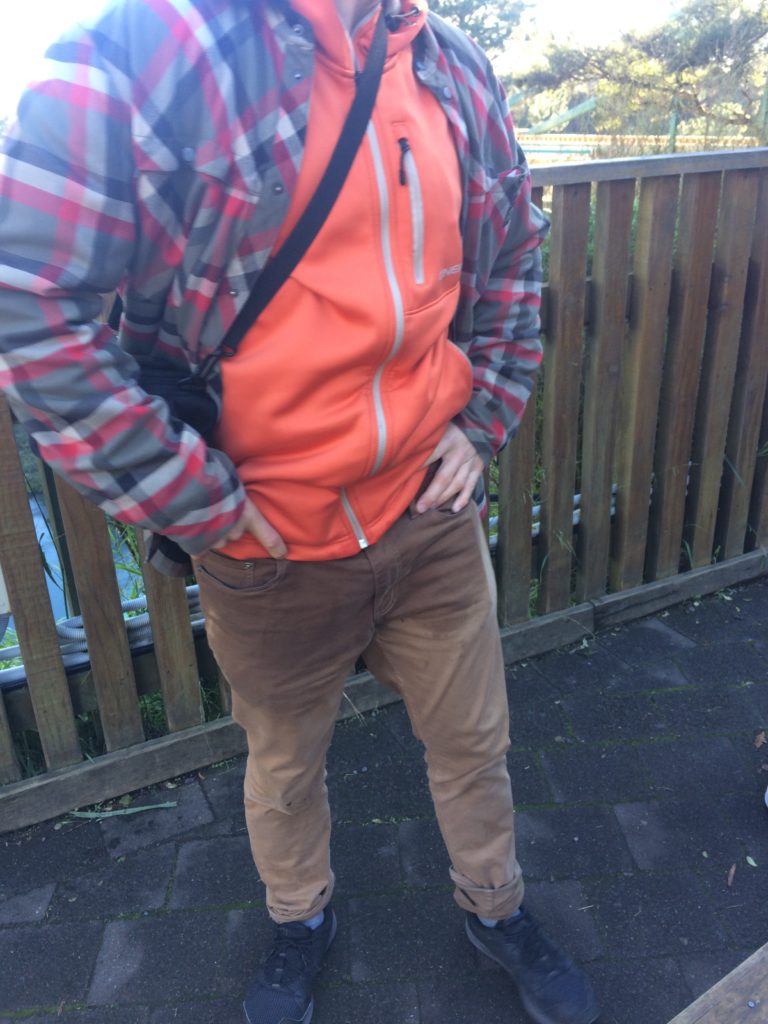 Luke stepped to the edge and had the same expression as Jesse. Luke was successful at receiving a “little dunk” and only got his shoulders wet. Luke’s description says it all, “Like nothing you have experienced before!”

After that, it was back to the house to get ready for our second adventure.

Okay, well it’s not really the sea but we were working with what we had, Lake Taupo. Jesse had managed to line up a boat behind which we could do some wakeboarding for a few hours. This was on my summer bucket list but it had to get pushed out to autumn. Since it was the off-season, all of the proper wakeboard boats were in storage and the only thing he could hire was a pontoon boat with a 75 hp motor. We were sceptical that it was going to be able to pull us out of the water but, again, we were working with what we had.

By 1 pm the wind had picked up and was whipping down the lake, straight at us. After packing all of our beer and gear on board we took off into the wind with me behind the helm. The waves were quite large for a pontoon boat and unless we were idling the waves would splash up over the deck and soak us all. Maria took the record for most layers to stay warm! 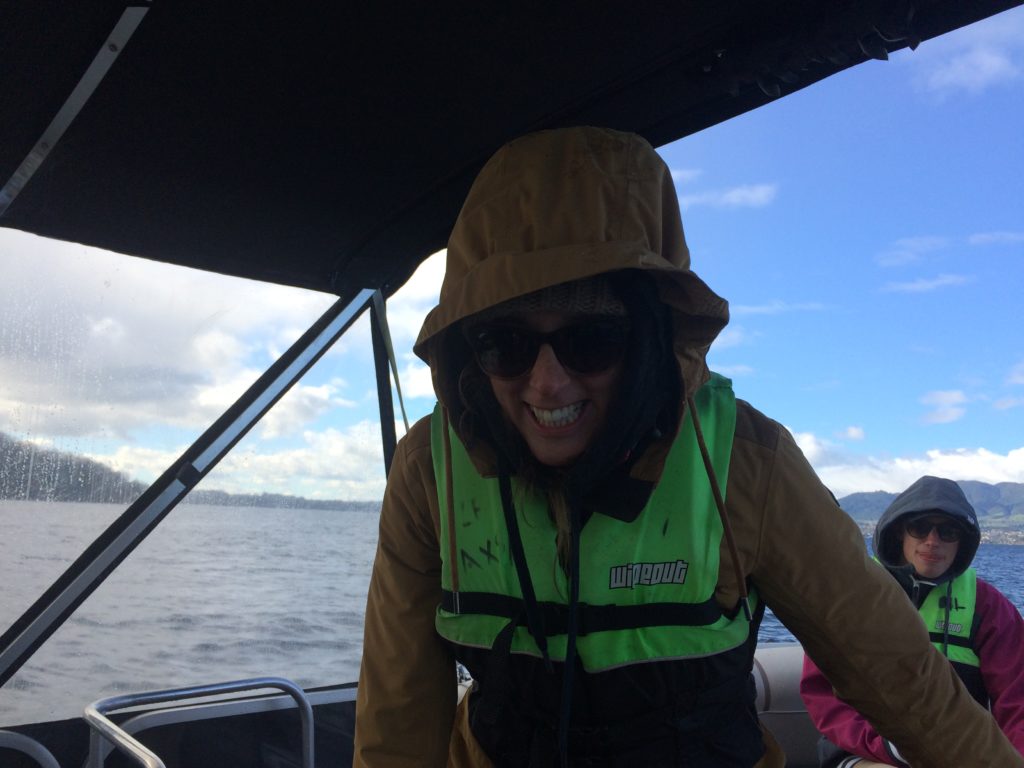 Jesse was the first to attempt wakeboarding with our experienced skipper, Toby, behind the wheel. He did a better job than I was doing. Jesse made it up on the first try and proved to us that it could be done but it was at turtle speed, compared to a usual run. Oh well, as long as we could tick it off the list we were happy. I hopped into my wetsuit next and gave it a try after Jesse. It was slow but it was awesome and I don’t think I had ever wake boarded in such cold conditions before. A great excuse for some fun. 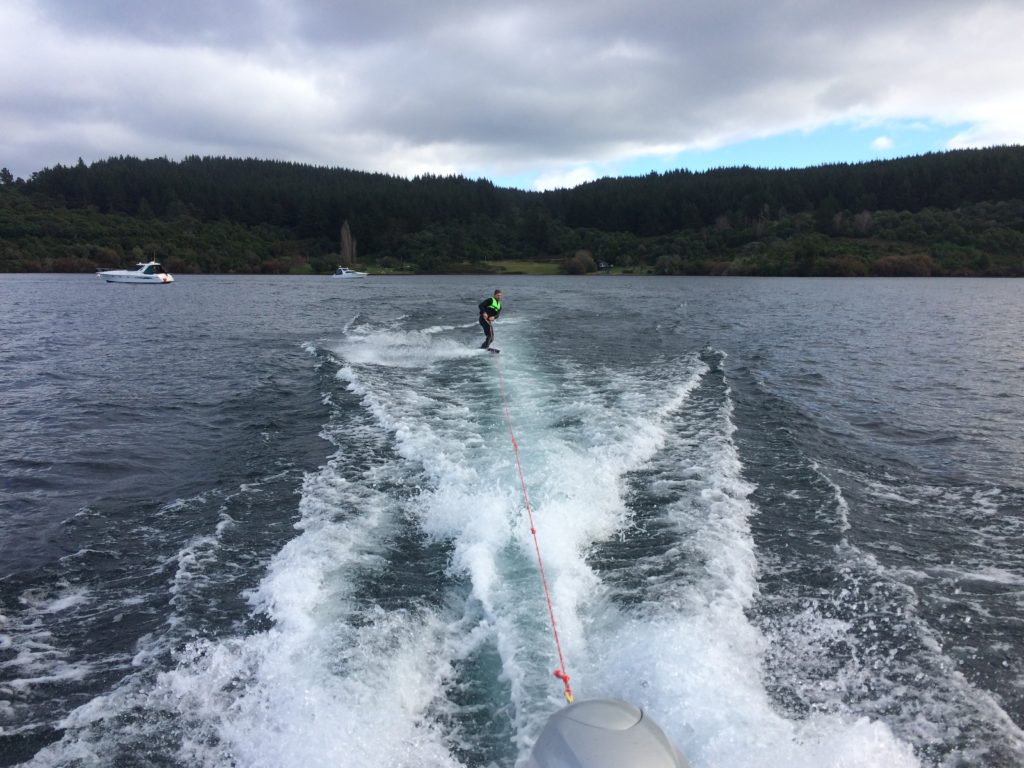 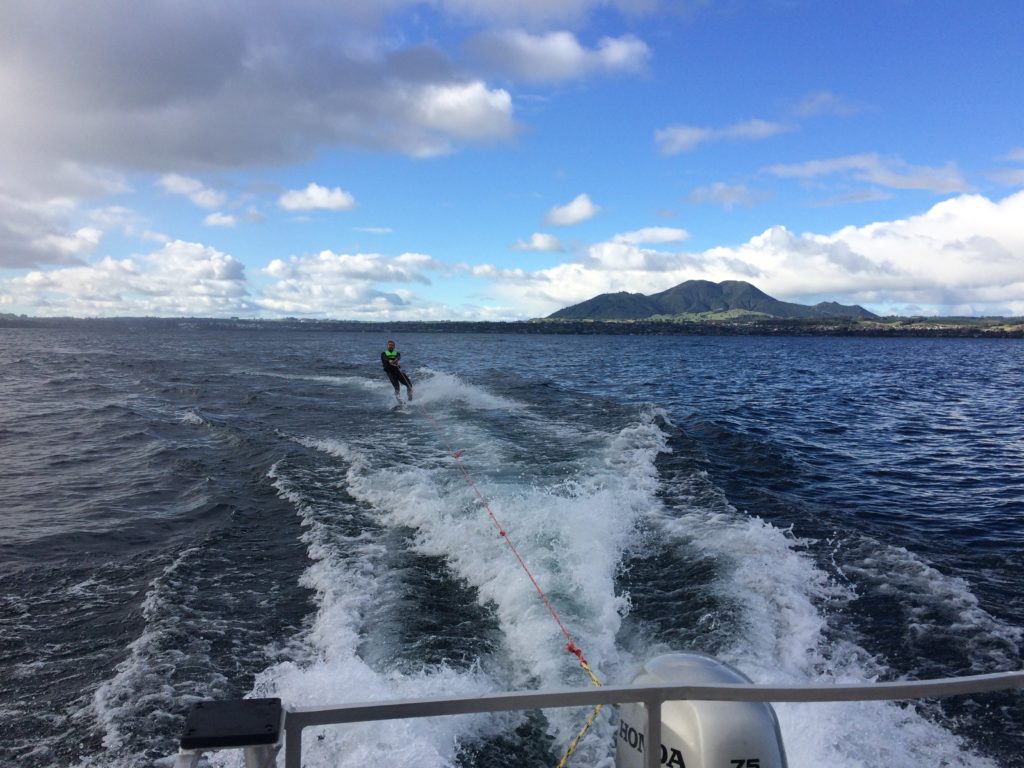 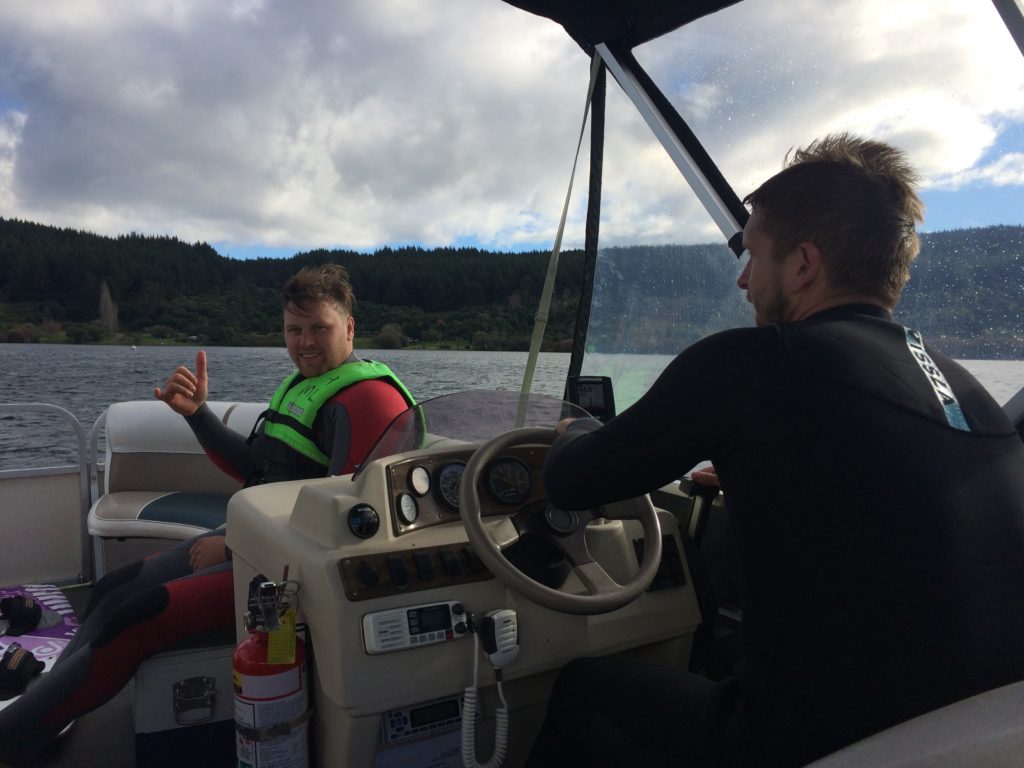 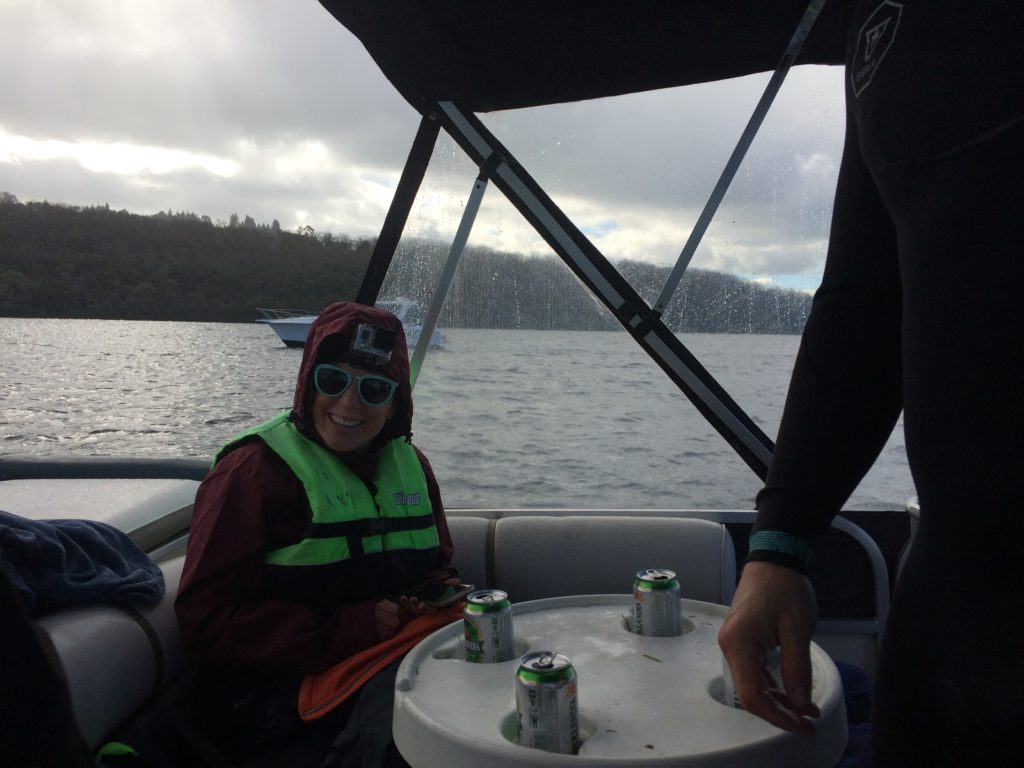 After Toby, Pete and Luke managed to get up for a few runs, we were out of beer and chilled to the bone. It was time to get back to the mainland and warm up. The team agreed that a hot pool session was in order so we made our way down to Wairakei Terraces and spent the next hour warming up.

Once our blood started flowing again, we went back to base camp to cook up another feed and get ready for a night on the town. Although my birthday was the middle of the next week we still treated Saturday night as a night to celebrate. We shared several rounds of drinks in town that night and all came home in the early hours of the morning.

Needless to say, the morning was a bit of a slow start but we manged to have some breakfast and pack the cars before checking out of our accommodation. Before leaving town, we still had one more environment to conquer.

One thing Taupo is known for is great mountain biking at Craters of the Moon. We were still moving pretty slowly but all managed to get on our bikes and follow our tour guide, Jesse, around the forest. I knew Taupo had the sea and the sky covered but the other reason I chose Taupo was because lots of the mountain bike trails are over pumice stone. So, when it rains, it doesn’t become slick because the water runs off of it and your tyres can still grip.

Jesse took us through some easy trails and through a 7 km loop that most of us had never ridden before. We did not ride anything too intense but I still had a couple close calls on some steep sections. It would have been great to ride more but no one had much fuel left in the tank. This was the only photo I managed to capture to prove we did it. 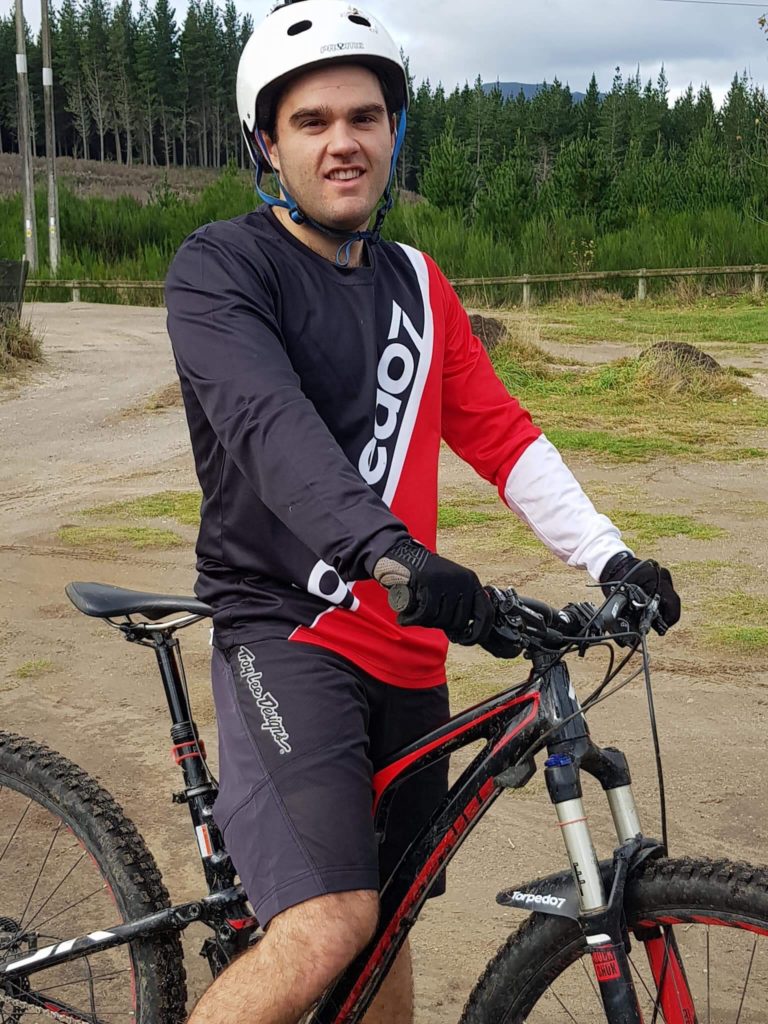 There it is! Land, sea and sky, conquered in one weekend at an amazing location. And I was so glad to have my friends there to share it with me. Thanks to all those who came out and we will have to start planning for my next birthday!